“They Call Me Magic” offers a rare glimpse into the incredible real life story of Ervin “Magic” Johnson, who left his mark on history through his work—both on and off the court—and continues to impact our culture today.

With unprecedented access, the docuseries explores Earvin “Magic” Johnson’s remarkable journey from being the face of the Los Angeles Lakers and cementing himself as an all-time NBA legend, to changing the conversation around HIV, and transforming into a successful entrepreneur and community activist. From his humble beginnings in Lansing, Michigan to becoming the global force he is today, “They Call Me Magic” features intimate interviews with Magic, his family, and an all-star lineup, as the docuseries charts the cinematic life of one of the biggest cultural icons of our era.

Sheen was in attendance at the “ They Call Me Magic” premiere in Los Angeles which it was a star studded event. All of Johnson’s close friends and family was in attendance like Samuel L. Jackson, LL Cool J, Stevie Wonder, Stephen A. Smith, Jemele Hill, Dwyane Wade and more. 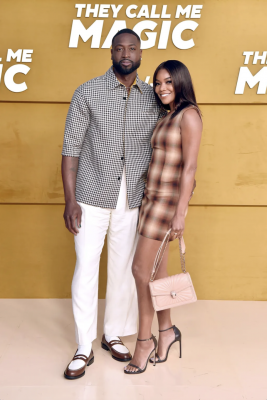 We were able to speak with some of Johnson’s friend which they all shared how nobody compared to him in the league, what current players and business minded can learn from him as a ex NBA player and as a businessman.
When speaking with the legendary Stevie Wonder when asked who would be his current favorite R&B artist he stated he couldn’t just pick one but he does like Ari Lennox. While Gabrielle Union shared her favorite hip hop artist currently is her family, Saweetie.
Hill stated that something that current day players could learn from Johnson is his competitiveness because if you focus on winning everything will fall in place.
Smith shared that he couldn’t compare any current player to Johnson because he was the whole package that was a weapon that could be used on the court. He also stated he makes winners with whoever he touches including people on the court, off the court in business and he even made Smith a winner in broadcasting.
The crowd scurried in as Johnson introduced the first episode of the four part series at the premiere that premieres on April 22nd on Apple TV plus, which then was  followed with an after party at Delilah’s. At the after party everybody danced on the dance floor all night including Johnson and his wife Cookie which they also had a special performance by “ The Thompson’s”.
Watch the full interview below: