“Make Me Say It Again Girl” A New Collaboration By Ronald Isley, The Isley Brothers, and Beyonce Makes Its World Premiere

Yesterday, Rock and Roll Hall of Fame® inductees, Songwriters Hall of Fame inductees and GRAMMY® Award-winning, music legends, Ronald Isley and The Isley Brothers unveiled a new collaboration with Beyoncé. These iconic artists came together to recreate the Isley Brother’s classic love ballad, “Make Me Say It Again Girl.” The song made its world premiere on radio today and will be streaming everywhere on Friday, August 12th.

Composed by Ernie Isley, Marvin Isley, O’Kelly Isley, Ronald Isley, Rudolph Isley and Chris Jasper, “Make Me Say It Again Girl” was originally featured on The Isley Brothers’ platinum-selling, The Heat Is On album (1975), which reached #1 on both Billboard’s Black Albums chart and Billboard’s Pop Albums chart and spent 40 weeks on that chart.

After more than 60 years of creating massive hits, The Isley Brothers continue to produce timeless and impactful music showing why they are international treasures who are firmly woven into the fabric of our culture. 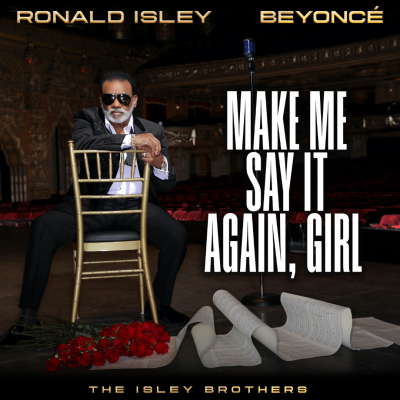 About The Isley Brothers

The Isley Brothers hold the distinction of having influenced artists from The Beatles to Ice Cube. They have been inducted into the Rock and Roll Hall of Fame®, the Songwriters Hall of Fame, the Vocal Group Hall of Fame®, and the GRAMMY® Hall of Fame. Their songs have also been included on President Barack Obama’s famous summer playlists. In addition to multiple GRAMMY® Awards, they have over 28 platinum albums and received the prestigious GRAMMY Lifetime Achievement Award in 2014. They’ve sold over 18 million albums and entered rarified air among “a select few groups to land on the Billboard Hot 100 with new music in five different decades.” And with generational smashes including, “This Old Heart Of Mine (Is Weak For You),” “Shout, Pts. 1 & 2,” “It’s Your Thing,” “Twist And Shout,” “Summer Breeze,” “Fight the Power,” “That Lady” and many more, The Isley Brothers remain one of the most loved and most sampled groups of all time.

For Information On The Isley Brothers Visit: