Man Proposes to 100 Women in Middle of Time Square

Providing an experience of a lifetime, 100 brides-to-be in white wedding gowns exited the New York Marriott Marquis located on Broadway and 45th on Memorial Day. Wearing a tuxedo, actor, and social media influencer, Juhahn Jones led 100 women to the infamous red stairs located in the center of Times Square, swaying to Jagged Edge’s “Let’s Get Married-Remix”. There he dedicated a public speech expressing his sincere gratitude and appreciation towards all women while acknowledging how beautiful and valuable they are. He then went down on one knee and asked all 100 women to marry him. 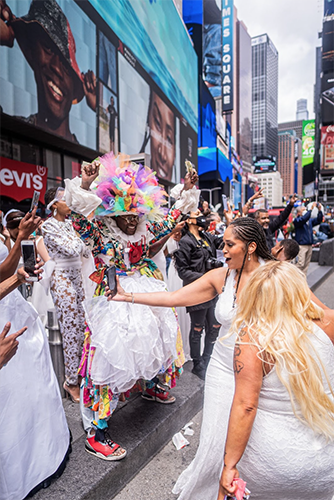 “Without the women there would be no humans on this earth.” – Juhahn Jones

Stopping traffic and joined by social media influencer and fellow cast mate Tonio Skits, they turned the corner of Broadway and 44th St. where the lit 48- foot billboard of the upcoming film “You Married Dat???,” starring Juhahn Jones, alongside leading castmates Apryl Jones and Audra Lachelle Kinkead. Joining this star-studded cast are LisaRaye McCoy, Michael Colyar, Deshae Frost, Red Grant, Big Jah and more. In the movie, Juhahn finds himself engaged to more than one woman at the same time and has to find a way to get out of the situation in one piece as the entanglement unfolds from Vegas to LA. “You Married Dat???” is the climax from Juhahn’s YouTube series “You Hittin Dat?”, which has over 45 million views to date. 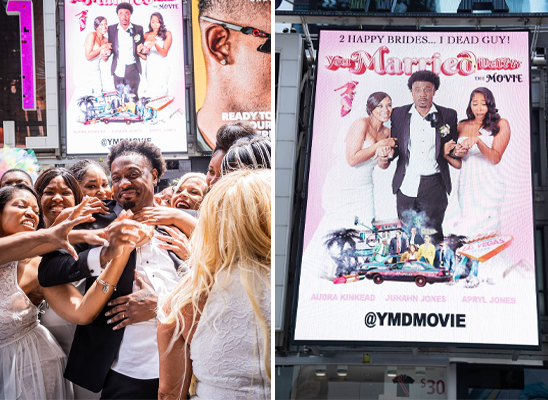 Although this is a parody imitating the comedic film “You Married Dat???,” Juhahn Jones teamed with a diverse selection of women ranging from ages 18-78 years old from various locations to ensure that women from all walks of life are given an opportunity to wear a wedding gown while embracing their confidence and beauty and understanding that marriage has no limits regardless of age, shapes, size, or color.

With the help of his marketing team and movie producer Timothy Christian of Motive Movie Group and Clifton Alexander of Brits Marketing, Juhahn used the movie concept to devise an eye-catching “flash mob” for the social media marketing event making it the 1stflash mob to take over the center of Time Square amid pandemic. Teaming up with costume designer Oketo Burks and fashion model Destiny Bess, Juhahn, and event manager Ronda Cox secured 100 gowns from local bridal shops such as Brownstone Bride located in Brooklyn, New York.

“You Married Dat???” produced by Juhahniverse Films, Motive Movie Group and You Married Dat Productions, LLC, will hit theatres and Clustr.TV streaming service in Summer 2021. If this display by Juhahn and his team in Times Square is any indication of what viewers have to look forward to, this movie should certainly be added to your summer to-do list! Check out the trailer for “You Married Dat???” at  www.YouMarriedDat.com. 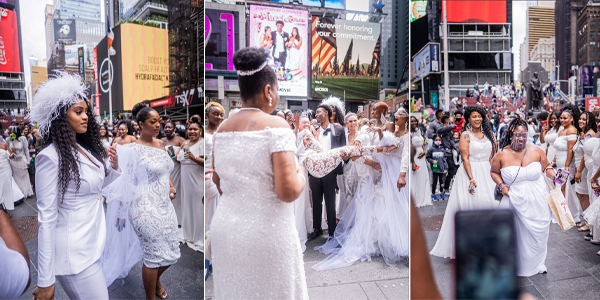