Manifesting Dreams To Achieve More From Your Life

At some point in time, everyone has dreams. It’s human. During childhood, those dreams are big, imaginative and ambitious. When prompting this conversation with an 8 year old, you’ll be taken aback by their response: costume designer, movie producer or president.

By the time we’ve become adults, it’s more likely that those starry-eyed visions have changed, suppressed by work and family responsibilities. A “dream deferred” as it’s been coined. However, you’re never too young or old to manifest your dreams into the life that you desire. 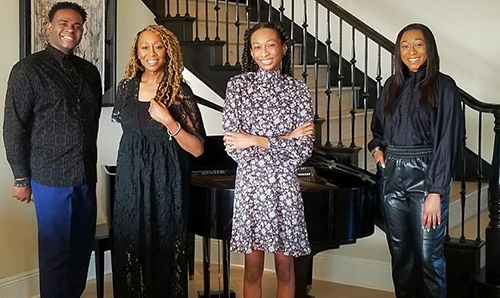 You may be familiar with the 2006 best selling book, The Secret, which focused on the process of manifestation and has been widely discussed by thought leaders Deepak Chopra, Oprah Winfrey and Iyanla Vanzant. Manifesting is choosing to intentionally create what you want and believing that you can bring anything forth into your physical reality by using your thoughts, feelings, and beliefs.

But, first things first, even though manifesting is about turning your dreams into reality, it does require that you take proactive steps towards whatever it is that you desire.

Research has shown that only three percent of people set their goals, and only about one percent write them down. I am not saying that the other 97 percent of the population doesn’t have dreams, but for whatever reason, they do not take steps to make their dreams a reality.

Without dreams of your own, you’re susceptible to living out those of others. In true self-reflection, are you living as your best self? According to a Gallup poll, 70% of employees are burnt out and feeling bored. This data proves that you’re probably one of them who’s feeling that there’s more to life.

Embracing these 4 powerful steps will transform your life. Our family committed to the process and are living as our best self.

It’s important to take time to think about where you are in your life right now and where you want to be. Once you have a clear idea of what you want, your brain can prepare your mind and connect those thoughts to your actions. In order to be successful, your dream must connect with your passion and purpose.

At a young age, both of our daughters demonstrated a high level of creativity. The oldest, at 5 years old, was completely immersed in Disney movies. The youngest, at 7 years old, was curious about movie making techniques.

When my husband, an Electrical Engineer, started to feel stagnant in his job, he decided that moving to the parks and entertainment industry might bring him greater self-fulfillment.

After 20 years of battling through a health condition and gaining 100 lbs, I started to feel an overwhelming desire to take back my life. I resolved that what I’d been doing wasn’t working for my long term optimal health.

In this step, your success will be contingent upon the ability to clear out negative patterns, fears and self doubt. Don’t sacrifice happiness for fear of change.

For many years, my family New Year’s Eve involved a vision board party. We eat, drink and are merry over perusing through magazines, cutting out images and dreaming about what the next year will bring. In these 2 hours, we review last year’s board to reflect upon our success and share the significance of each image to us.

By age 8, the oldest daughter was surfing the internet to understand if the making of costumes for Disney movies was a real job. The youngest, at age 9, asked for a “real good” camera in order to create stop motion movies with her baby dolls.

In 2012, my husband and I began to have pillow talk about how great it would be for him to go work for the happiest place on earth.

In 2018, my vision was to have thinner peace. I’d grown exhausted from walking around in someone else’s body. To the vision board, I added old photos of myself in order to believe that weight loss was achievable. I knew that others who shared in the struggle and would want to see this new lifestyle I’d create. The last thing added to the board was the desire to have a cooking show.

In theory, this is a line from where you are and pointed towards where you want to be. Take time to write down a list of everything that needs to happen in order to make your vision a reality. At each step, include resources and only people that will support your efforts.

Brainstorm about all of the obstacles that could get in your way. Writing them down will neutralize them.

A plan was created to begin developing the girls skills to pursue careers as a Costume Designer and Television Producer. This included sewing, drawing, dance and photography classes and countless projects.

Eventually, we stepped out in faith and sold our brand new home in St. Louis to accept a job opportunity that would move us to the West Coast in order to fully propel our plan forward.

On New Year’s Eve 2018, I started creating a roadmap towards thinner peace. It included finding medical specialists, nutritionists, understanding the medical plan resources and leaning on my family for support. I needed to acknowledge that my work schedule could be an obstacle to maintaining a consistent workout and planned accordingly.

Be Well + Live Well became my mantra. Cooking on social media seemed to be a great place to start sharing my journey.

The youngest daughter accepted an academic scholarship to California Baptist University where she’s pursuing a degree in Film Production with a concentration in Creative Producing.

A Goal-oriented mindset means setting goals and planning tasks, then taking action to complete the tasks that lead to the larger, overall accomplishment while staying focused on the desired results. Becoming goal-oriented allows you to effectively allocate your time and energy to tasks that drive progress toward the results you want.

By the end of 2020, the oldest daughter had earned membership into the Costume Designer’s Guild. Soon, the youngest will achieve her BA in Film Production and Creative Producing. My husband is still working at the happiest place on earth and loving it.

I’d lost 90 lbs and launched a health and wellness lifestyle site, Honey + Company. And made a few cooking videos for my YouTube channel. Then, I shared them with KTLA and was asked to cook on the launched show, LA Unscripted. Next, I realized that there was a newly launched cooking network on Roku TV for people of color on the Taste On T.V. network.

At this point, my confidence was off the charts. I launched the one stop site for products that align to my mantra. Next, I decided to go big and connect via LinkedIn to the network’s CEO. I shared with him my story and passion for helping others to Be Well + Live Well too. That conversation served as the framework for my now weekly 30 minute cooking show, Be Well + Live Well With Lisa on the Taste On T.V. network which airs Tuesday, Thursday and Saturday at 1:30 pm and 6:30 pm EST.

There’s many different pathways to achieve your dreams. For us, these steps are tried and true. If you dare to dream, there’s no limit to the success you can achieve from your life.

This feature was submitted by Lisa A. Holmes

Lisa A. Holmes is a best-selling Author and Media Contributor for Money Magazine,Fast Company, Thrive Global, Authority Magazine and others. Holmes is CEO of Honey + Company, a health and wellness lifestyle company that showcases artisan and fair trade beauty, electronics, food, home decor and wellness products and services.

All images by James Holmes