Judge Greg Mathis may have his own TV show called Ask Judge Mathis, which sees him sitting in a courtroom helping people with their legal issues, but now he’s expanding the spotlight to the rest of his family.

Having been on air for 23 seasons, Mathis had his own fair share of involvement with gangs and time before bars before turning his life around. To date, Mathis is a former Michigan 36th District Court judge, television court show arbitrator, author, television producer, and motivational speaker/activist.

On Friday June 17th, Amir Mathis premiered the first episode of Mathis Family Matters to an exclusive crowd at Casita in Hollywood, california. Amir is the youngest son of Judge Greg Mathis Sr., as well as the executive producer and creator of Mathis Family Matters. The premise of the show is Greg and Linda Mathis have their 4 children visiting Los Angeles all at once for the first time in 15 years, and as they attempt to get them to stay. 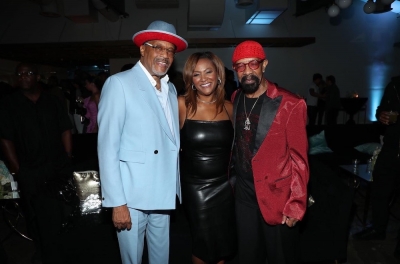 Viewers get an inside look at how they navigate the drama and dysfunction that families typically do, but it’s almost always with love and care for one another. Witnessing a family full of successful black professionals interact in such a loving and healthy way was a beautiful experience.

During the premiere, you could see that Mathis family’s bond was just as strong off camera. The love that the Mathis Family exuded for one another was so contagious that it made the closest stranger feel like extended family. The food and drinks were provided and the air was full of hit records from the late 70’s and 80’s. Sponsored by Makers Mark, the room was reminiscent of the family cookout to start the summer.

Every face was smiling or laughing and for a brief moment, we were all a Mathis. Be sure to catch Mathis Family Matters on E! Entertainment.