Growing up, Kamaya Tarpley never saw heroes like her in the types of books she enjoyed. So, she wrote and published her own. Today, she’s the proud author of 11 dark fantasy and horror books, and she has plenty of other stories to tell. These are both challenging literary genres, but there’s lots of opportunities to excite, engage, and even scare audiences.

“Knowing that I never saw myself in any of the fantasy or horror novels I read growing up keeps me motivated,” she said. “I would love another Black or POC girl to see that someone sees her, and she is not forgotten.”

Along with taking her place among horror writers, Kamaya Tarpley also wants to be an advocate for those who self-publish. This type of publishing used to be considered amateur/vanity-based, but now it’s a sign of a business-savvy entrepreneur who puts extra legwork in to get their books into the marketplace, and gets to keep the proceeds themselves.

“It takes a lot of crafting and self-analysis but it can be done,” she said.

Her latest novel, “Witches of Ravenwood,” tells the story of Scarlett, the leader of a secretive Victorian coven of witches in a small town. As she gains more power and learns to better develop her magic, the coven is framed for a vicious murder committed by the local governor. 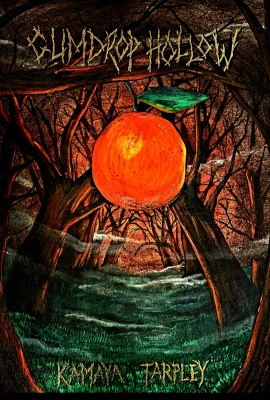 With the exception of her first two novels, Kamaya Tarpley likes to make women the heroines and the survivors.

“I feel that women, especially Black and POC women, aren’t really shown as the powerful beings they are, with zero male rulers,” she said. “I also enjoy taking legends and myths and twisting them into interesting dark stories everyone would enjoy.”

Kamaya Tarpley started writing in 2015 after a relationship with a member of the military ended. She also reflected that writing had always meant something important and special to her throughout her life.

“I had a former boyfriend tell me to leave writing behind, and it was then that I realized how much writing professionally meant to me,” she said. “After publishing the first book and then the sequel, I was happy my story got out, but now it was time to write what I enjoyed, and that was dark fantasy.”

The Las Vegas native has lived between the East Coast and the West Coast for years. She calls herself a natural introvert but lives vicariously through her characters, especially those who have adventures and help others.

She is also someone comfortable reaching out directly to other authors and prominent figures via social media.

This included TV actor/producer Robert Ri’chard, who agreed to be a model for one of her book covers. She even flew down to Los Angeles for the opportunity of shooting Robert.

Look for some cool products from her later this year, including a novel called “Gumdrop Hollow,” loosely based on the German myth of Krampus, a twisted being who sometimes travels with Santa but is charged with punishing the bad kids, or worse.

For more info about Kamaya Tarpley and her books, visit kamaytarpley.com.