One of Constance Jones’s favorite phrases is “It doesn’t matter where you start; it’s where you end.” This particular quote has resonated with her all of her life and continues to motivate her to always do her best personally and professionally and also continue to look ahead to great things happening in the future.

This strategy has seemed to work quite well: today she’s a respected broadcast journalist with two Emmy nominations and the weekday morning anchor of NBC6 New Today in South Florida. She’s worked in competitive TV markets around the country and has had the opportunity to interview all sorts of amazing people.

“As the daughter of an immigrant and a first-generation college student, I don’t take anything for granted.  I feel extremely lucky for all the opportunities I’ve been given,” Constance Jones said.

Professional media is extremely high-stakes, especially in the top markets. But she’s been able to make a name for herself in New York City, Miami, Oklahoma City, Atlanta, and Richmond, Virginia. In February 2021, she gladly accepted an invitation to return to Miami.

Over more than 15 years of journalism, she’s been a reporter and anchor and even the Communications Director for the 17thJudicial Circuit of Florida, working alongside the Broward State Attorney. She’s also worked at CBS affiliates as well as National Public Radio. She even had the opportunity to work with legendary CBS journalist Dan Rather. 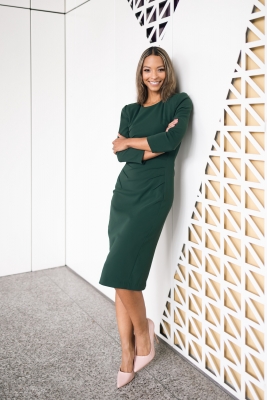 Through it all, she’s kept her passion for telling people’s stories, especially people who don’t think they have a voice or that anyone will listen to them.  “There is power in passion: it drives and pushes me to work harder to achieve my goals for my job,” Constance Jones said. “Today I am committed to telling the stories of the South Florida community.”

She has earned a variety of honors and achievements during her career, including multiple awards from the National Association of Black Journalists for Excellence in News Reporting. The Texas Associated Press has given her awards as well as the National Academy of Television Arts and Science.

Constance Jones was also chosen as one of the Miami area’s “Top 40 Under 40 Leaders of Tomorrow” in Legacy magazine.

She’s a native of Stuttgart, Germany, and spent most of her childhood in Romania. Interestingly, she admits that one of her earliest role models was April O’Neil, the journalist who helps the Teenage Mutant Ninja Turtles.

When she’s not telling the stories of fellow Floridians, she enjoys spending time with her family, including her husband Troy Simmons, a Miami artist.

“I love reading and I love to crochet – crocheting is my yoga,” she said.