When it comes to exceeding all expectations and beyond, World Champion Runner Joseph Gray comes to mine.  He was recently drafted as the perfect new addition to their already stellar lineup. The athletic pro is ecstatic to be inducted into the prestigious family. Gray, however, is not just an incredible athlete, but he is a family man and expert gardener when the cameras are down. The man who scales mountains for a living has found the kinesiology tape to be just he and what every athlete needs.

A forever athlete, Gray was recently seen at the 13th XTERRA Trail Run and Trial World Championships where he placed first with the half-marathon title. However, this is not a first for the record-breaking sports star. He relishes in being the first African American to make the Team USA World Mountain Running Team. As if that were not accomplishment enough, he has also become the first athlete to win the North American, Central American, and Caribbean Championships in Cross Country and Mountain Running.

On a personal note, Joseph adores spending time with his young family when time allows. He is father to two children and husband to a wife that keeps the unit together. He also loves to specifically grow peppers in his garden, as he has an affinity for hot foods. That athletic stomach comes into play when it is time to take on a plate of spicy pasta. Gray is well aware of his influence on the younger generation of African American men growing up. He hopes that his accomplishments have opened the doors for others who may not know there are other paths available for them. 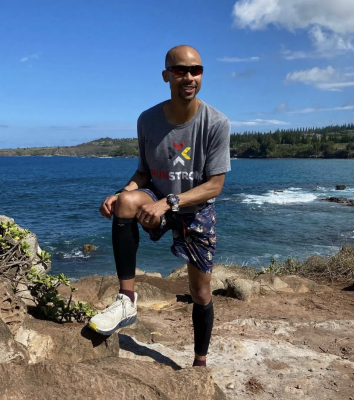 Gray thanks his travels across the country as part of a team for expanding his mind. He was able to learn about many cultures and open himself up to other opportunities. One of these being becoming a new spokesperson for Go Sleeves. He was already a customer of the brand as the product prevented his calf muscles and tendons from straining while he ran. Still a full-fledged user, he is looking forward to spreading the word on how Go Sleeves has helped him sustain his professional life so that he could be just as active during off hours with his family.  To Learn more about his journey, follow him on social media @joegeezi.