Forbes is a global media company focusing on business, investing, technology, entrepreneurship, leadership, and lifestyle. When you think of Forbes Magazine, you think of money. Christianna Hurt is an entrepreneur who has plenty of it. SHEEN Magazine had the pleasure of sitting down with TheBossPalace creator to talk to her about entrepreneurship, her life, and the roads she traveled to get there.

“I feel like it’s anyone who has to wake up and produce a way to put food on the table rather than allowing someone else to control what they make by giving them hours.”

She hates the word entrepreneur ironically when that’s what many people associate her with being. Christianna explains that when the term is used, it sounds like a side hustle. She doesn’t like to look at it like it’s a side on your plate but as her main dish, her entree. She does e-commerce which sells items online.

“Wealthycollegekid is a reflection of everything I wish I was when I was down learning, earning, and being able to actually profit while you educate yourself on a skill set. The boss palace was actually my business partner! He called me one day and said,  ‘ I have this brand, it’s doing well, I want you to be the face of it. This is really your alley.’ So I became the face of the boss palace helping others seek a business through something as simple as a PDF.”

TheBossPalace is a site that allows men and women to become entrepreneurs themselves. There are so many different vendors to choose from to start selling what you want to sell. If you need help with logos, web designs, finding what to sell, credit scores, marketing, and one on ones, they have that available at your fingertips.

What was your biggest mistake that you had to learn from?

Relationships, always! “Whether personal or business, nowadays people aren’t kind or nice and it can set you back so much. The wrong person being involved can cost you thousands of dollars! My eviction is a perfect example of that.”

Surprisingly, Christianna was born with a silver spoon. She comes from a family that has money. At 16, she had a Mercedes Benz, and to prom, she showed up in a Bentley! But, even though the entrepreneur came from money, she wanted to make her own. She didn’t want to depend on her parents, and that eviction is what sparked the hustler we know today.

How did you feel about being recognized by Forbes?

“Unreal! You know what is so sad, that day so many people were celebrating me, but at the time the wrong person was in my circle downplaying it! I didn’t feel like I even had accomplished anything for almost a week. It wasn’t until someone who had known me since I was 13 years old made a post about it, and it hit me like wow, this really is something as kids we talked about, and I’m looking down at the proof I did it at just 26 years old I was seeing a childhood dream come true for everyone to see. You know, people don’t think that it’s real because so many people may lie or pay to get ahead, but the truth is I was noticed and celebrated for simply being myself. 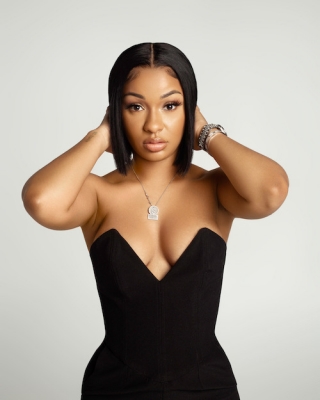 Being a woman of many businesses, what is the next big project you see yourself doing?

“Children’s clothing with Just Kidding Kids is my main focus next!”

Christianna was 18 weeks pregnant when she miscarried. She was working way too much. Her miscarriage led to having a c section with a 3-inch scar that she wears every day. Postpartum didn’t hit until months after losing her child, and when it hit, it hit hard. Her dad had to take all the mirrors out of the house until her body went back to normal. Being almost five months pregnant with no baby was the toughest pill she ever had to take. However, she came, she saw, and she conquered. Christianna understands how many people struggle every day with an average 9-5 job which is why she is a stickler about being kind. You never know what people are going through, especially during this pandemic. Even though we are still in a pandemic, the year 2022 is the year of Christianna. She thrives on being patient and helping out in any way she can. She is a true entrepreneur and pioneer paving the way for many