Meet T̷R̷O̷N̷, The 24-Year-Old Creating His Own Genre Of Alternative Hip-Hop

The moniker T̷R̷O̷N̷ is inspired by Tron Austin’s love for sci-fi, and he brings that same energy into his music. Arriving on the scene with his own unique sound, a blend of R&B and hip-hop laced with real instruments that any music-lover can appreciate, the Atlanta native is a true artist in every sense of the word. With his background playing drums and ability to produce his own music, the rising star is here to declare his place in the music industry once and for all.

Beyond being a rock star and MMA fighter, T̷R̷O̷N̷’s musical roots run deep, especially as the son to two legends: Chilli from TLC and super-producer Dallas Austin. Growing up in Atlanta and soaking sold-out tours with his mom and studio sessions with his dad, it’s no surprise that T̷R̷O̷N̷ has found his own footing as a recording artist.

Exploding onto the scene with his first single “Captions,” the 24-year-old creates relatable music to help listeners cope with everyday life. Regardless of the circumstances, he hopes to uplift his fans and encourage them to step into greatness, reaching their full potential no matter the cost.

Most recently, T̷R̷O̷N̷ released his project INSOMNIA and even proposed to his girlfriend of 4 years on Valentine’s Day. Sheen Magazine caught up with T̷R̷O̷N̷ virtually to discuss his sound, his musical background, the “Take You There” music video, his new project INSOMNIA, how he got into MMA, and more!

For those who don’t know, who is T̷R̷O̷N̷?

I’d describe myself as being, of course, a musician. But when it comes to what I bring to the table, I say a wide variety of R&B. But some of my fans will say rap or pop, so I just say alternative rap. I keep it a huge genre. What I’m trying to push is alternative hip-hop. Me being a drummer first, instruments hit closer to home. Going from there to a more production artist world, I always wanted to incorporate real instruments if I could. I have my electric drum set back here, but that’s my process.

Long-term wise, I want to be able to be an impactful performer. To do that, you want to incorporate as many real elements of music, as many real things that are already there as possible. Because when it’s showtime, you have a live band, you can do all that. I say bring two worlds into one where you make a hip hop concert and a rock concert fused together. I’m not the only person who’s ever thought about that, there’s plenty of artists who do that now. As far as direction goes, that’s the direction I’m going in where it’s hyped but it’s also chill laidback stuff. Like I said, a variety.

What was your vision with the “Take You There” video?

It was a dope experience. I went up there in New York, that was my first time traveling since the pandemic. I traveled one other time before that for my music video “Captions,” back in top of 2020. I went out there and we really got it done in a very lengthy amount of time. It was only a couple of days block, but we got so much done.

As far as the vision itself went, you’re pretty much telling a girl what she can bring to the table. Once you put it in a song, you’re not really sure if you want to give her all that because of whatever circumstances. You’re trying to tell her that if you’re the one for me, you’re really down like that and it’s real, I’ma “Take You There.” Show her this whole different world, that’s when this portal thing came into mind. I wanted to play off that and make it fun, bright colors too. [laughs]

What was the best memory from shooting?

My favorite part about it was interacting with the director, having them tell me to do certain things and getting into character. Just laying around with that because in a different lifetime, I could be an actor for a superhero movie. A villain, like a Green Goblin or Darth Vader situation in a different reality. I like anything that involves elements of that, bringing art and business together.

One thing you want fans to take away from INSOMNIA?

Definitely creative direction. It’s my second EP, the first one was released under Tron Austin. Spotify didn’t want to let me take the Austin part off so I had to merge the accounts, which is okay because at least they let me merge it. That was a really organic project. You know when you’re in college, it’s time to figure out what’s going on. That was my way of letting my parents know “hey, I’m passionate about music. It’s not just drums, I also produce. I’m an artist, I also write my music.“ I’ve been writing forever.

I always say until you put it on paper, you can say you’ve been doing music forever. I had an organic project I put together with a couple students who were my close friends, we spent a lot of time together. All the beats I made for all the songs, only thing I didn’t do is engineer it. I showed my mom specifically, everyone’s like “oh man, this sounds good.” I even had her go background vocals on one of the songs, but I didn’t want to draw the wrong attention. It’s your first project, you need to have a start. You shouldn’t think “oh I got this sick feature, I got this going on.”

INSOMNIA is my second project. I want fans to take away development, consistency of sound and my sound. So if I’m featured on a song, you’d be like “oh, that’s Tron. That’s what he sounds like, that’s his sound.” Every artist wants to get that, and it’s a journey. It’s always a journey. Every studio session’s a new session, but you have in the back of your head what you’re trying to portray. Okay, keep this criteria. Keep this lane, so you don’t go so far off the parameter. Everyone wants to show their stuff but in time, you got to show enough diversity and keep consistency. Have a fanbase to say “okay, he sounds like that.” That’s the biggest thing I wanted to take away. That’s what he sounds like, that’s his sound. It’s more of that vibe to come. 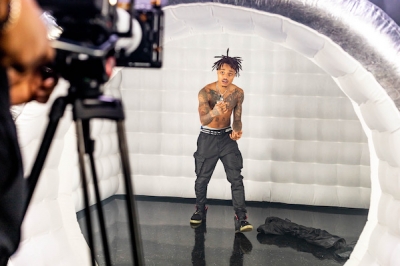 How’d you get into MMA? That’s dope!

Oh man, I got into MMA late 2015. It was another one of those stress-relief things. College wasn’t easy. Because it’s music college and it was mixed in, you have all these different degrees and elements that you’re going in. I was doing show production, a light fell on my leg. I was almost out of school for a week. [laughs] It was crazy. I ended up getting into MMA after 4 or 5 months being at Full Sail.

I wanted to do something that was scary, something that’s going to challenge me to do better and improve on. I did Taekwondo when I was younger, but you’re young. You do things and forget about it. I ended up falling. I didn’t even watch MMA in high school. After I got into college, I saw one McGregor fight. Man, that stuff’s really cool. Once I learned it was a human chess game, 10 times more interested. I’d see people from all walks of life: all different jobs, different careers, shapes, sizes, big guys, small guys, girls, it didn’t matter. We got on masks, everyone’s the same. The only thing that you have was your gloves, your shin pads, and your mouthpiece.

Sensei’s the master, everyone’s listening to one person. It may have had this cult feel, but you wanted to be a part of it because it was so positive. Everyone wasn’t really trying to get up in there and kill each other. At the same time, you did want to make sure you’re challenging each other to better yourself. Giving a military feel, but obviously the military’s a way different story. I wanted that discipline. I wanted something to make me level-headed, make me fall my ass a couple of times. Really have to learn because school’s already kicking my butt in other ways, but I wanted something tha’s going to physically challenge me.

New music is on the way and hopefully have some shows ahead. I’m getting more things together with the clothing line. I had hoodies I was selling. I was selling out of my black ones, my silver ones, trying to currently sell my white ones. I’m going to bring a lot more into the 777gangmerch.com page. T-shirts, more summer wear. I really had to get this project out, get INSOMNIA out. Get something solidified so I could say “hey, here’s my EP.” Consistency. The sum of all that if I can chop that down: consistency. 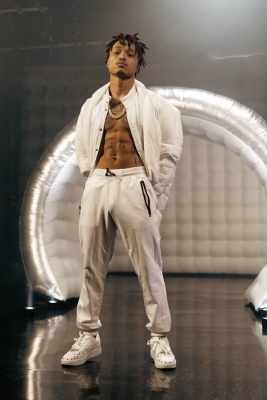