Michele Weaver On What You Can Expect to See In NBC’s NEW Series, ‘Council of Dads’

Actress Michele Weaver is a multi-faceted actor in all categories of entertainment. She’s been seen in theater productions, commercial, film, and television. We first fell in love with the Colorado native when we saw her in the romantic dreamed,Love Is __, but now Weaver is letting us view her in a different perspective in her exciting role as Luly Perry in NBC’s drama series, Council of Dads. We caught up with the talented actress to discuss her role, experience, and much more!

Tell us about your role in the drama, Council of Dads.

I play Luly Perry, she is the oldest daughter. She just finished college and is a writer. She plans on going to New York. When you meet her on the pilot, she is waiting to hear back about a huge internship with a New Yorker in New York City. She soon finds out with the rest of her family that her father has been diagnosed with cancer. 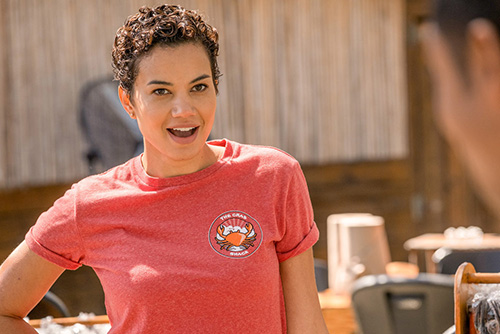 This has been an amazing experience. It includes a huge ensemble cast and every single actor is not only extremely talented and professional but they’re all full of life. There is so much personality and everyone is down to earth. We formed our own little family in Savannah, Georgia where we filmed the series. The writers and show runners just love what they do and they’re so passionate about it. When the people at the top have that much passion and excitement about the project, it kind of just trickles down to everyone. The crew was phenomenal. We all showed up for each other and made one another laughed. We believed in the story we were telling so it made it a great experience.

How were you able to connect with your character in order to bring her to life onscreen?

Luly Perry has so much life. She is just a loving, caring person. She cares so much about the world and has so much personality. I related to her. It’s great when you read a script and when you read the lines for the character you’re auditioning for and think to yourself that you want to be friends with that character. That’s how I felt about Luly. Her personality, heart, and drive is someone that I want to be friends with so it makes it a lot easier to dive into her story and passion. For me, it was easy to relate to her because of her relationship with her father. I have a close relationship with mine. She’s a writer, which isn’t the same thing as an actor but it’s similar because you don’t have a guaranteed 9-5 position. There’s a dream behind it. That hot and cold career is kind of like an actor. I related to her because she fights for what she wants. She is a server while trying to pursue a career as a writer. That was literally my life in Los Angeles. I was a server and went to acting class. I served and went on auditions. I served and I went on sets (laughs). That was something that I related to. Also, her love for family is incredible. I drew off those experiences and I admire her strength.

What are you currently working on? What can we expect to see from Michelle Weaver in the future?

The future is unknown but I’m also reoccurring on a show right now on USA called Briarpatch. Be sure to tune in to Council of Dads!