Mogul and Philanthropist, Dr. Basil “King” Beale Returns to the Music Industry on a Mission!

Dr. Basil Beale, better known in the music world as “King,” has been a key part of the success of many artists in the world of Reggae and Caribbean music. Having started out with his first label back in 1994 working with big names like Shabba Ranks, Buju Banton, and Luciano, King had very well earned the name in the industry. After building a very successful transportation empire, the mogul and visionary returns to one of his original loves—Reggae music! Now, having cultivated massive success in his own right as an entrepreneur, King is able to marry his passion for music and business savvy to create King Recordings Entertainment. After launching two short years ago, the label has already built an impressive roster of highly talented artists, and is already shaking things up in the world of Reggae.

Dr. Basil “King” Beale shares with Sheen Magazine about his faith, his passion, and his vision moving forward.

King, tell us about your humble beginnings and life growing up in Jamaica, and what led you to become the multifaceted mogul that you are today?

Well, I had a praying Grandmother and she spoke great things over my life. She always reminded me that I was a King and that my name meant King, so I was destined for greatness. She would tell me that I would do great things. I come from a Christian background, and I was a church boy drum player. Before leaving Jamaica at the age of sixteen, I was a track star but I did not have anyone to help me to flourish. I came to America and continued to run track, but then I ended up in business. I was always fascinated by cars, and I knew this guy that drove limos and he drove all these celebrities back and forth. I found a way to get the money to ride in his limo and I asked him all the questions about how to start the business. I got my first car and then I made a daily goal, and that is how the business started. I grew that into five limos that I designed with the factory by making the biggest and longest limos that anybody had ever seen at that time. These limos got me into the music industry because I was always driving artists and celebrities around. One day Shabba Ranks told me that I needed to get into the music industry. I then started working with artists like Verdy Green, Gold Teeth, and Luciano. Now today, we have a broad label, King Recording Entertainment.

You started your first record label, Wicked Wax Records in 1994. What was it like working with greats such as Buju Banton and Shabba Ranks and more?

It was great working with those artists, and building the label taught me a lot about the business. Back then as a label, I did not have to do all the things I do with the new label now; I started out doing management. Even today, with the new label, King Recording Entertainment, we are working on a compilation that has some of those artists on there.

While you have been legendary in the music industry for decades now, you started this amazing new chapter with King Recordings Entertainment in 2020 when the world was shutting down amid the pandemic. Tell us about that.

Well the music part of me has been since 1983 with all those great recording artists like Shabba Ranks and others, but during COVID, people started to stream more because they were staying in. We saw all the stuff that was going on, and decided to start the label so while the label is new, it has always been in my heart, and music has been a part of me for 25 years. 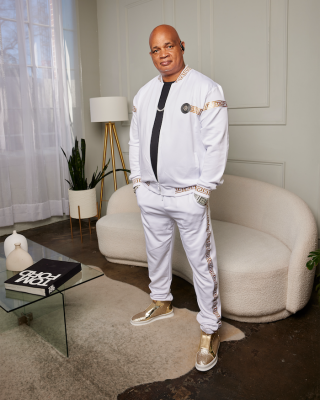 Tell us about your current roster of amazing new artists!

We have Marcus Antonio who is one of our artists, and he has three singles out right now. He has gone to number three on the iTunes charts. He was born and raised in Jamaica and his value will speak for itself. Then I have Michael Star who is my best friend’s son, and he is wonderful because when he performs he reminds you of Michael Jackson himself. We also have my daughter, Miikey, and she is a rapper, but she has a Reggae flair as a Reggae hip hop artist, and they are just a few of the amazing artists that we have. They are all doing so well as new artists on a new label, and that is a blessing. Only God himself can make moves like that happen.

How do you feel the music industry has changed, and what are the pros and cons of running a record label now versus the earlier days when you ran Wicked Wax Records?

Running a label back then, I did more management than anything else. I did not have to do all the extra things I do now with the label, but I did learn a lot from building a label back then. I think the music industry now is too wild and too crazy and too overtly sexual. I want to curb it a little, and bring it back to what it used to be. Reggae used to be more about consciousness. The Grammys don’t even recognize a Reggae category anymore.  I understand the industry so much, and I have so much respect from others in the culture, so I feel that I am the perfect person to bring it back, and I need the help of my artists to bring it back. I want to bring good Reggae music back.

I know that you played an integral part in the success of the Queen of Dancehall, Spice’s Grammy nominated album, TEN. Tell us about that!

I met Spice as an artist because of a partnership when she performed for me at a club we own and it was very successful. I worked with her on a concert and we did well with it. We then began to work together on her management and it all went from there. Even today, while Spice and I no longer have a business relationship, we are still friends. If I get a booking, I will still send it to her and I am still like a big brother to her and uncle to her kids.

I know that you are a true mogul in every sense of the word– you also run and operate your luxury exotic luxury sprinter and tour bus rentals company, Access Atlanta Group LLC, and your custom mobile transportation brand, King Kustoms. Celebrities such as the Kardashians, Latto, Shenseea, and more have rented your luxury sprinters. How did the connection with the Kardashians for the Met Gala come about, and how do you maintain longevity in the luxury transportation industry?

We didn’t even know who we were picking the Kardashians up for the Met Gala until they walked out, but it was a great surprise for us! I just reopened in New York and they used our transportation service for the recent Met Gala. In my business, I am blessed to be able to do five businesses in one–from transportation, to building the limos all the way to servicing them, and now that everyone is using Sprinters more, we are in that game now too! I always take pride in what we do, and when we do a great job for our customers, and in turn, they tell others about us.

Happy early birthday, and congratulations on your honorary doctorate! Tell us about your doctorate that you are receiving in philanthropy on your birthday, Saturday, May 21st?

Thank you so much! I have not worn a cap and gown in about thirty years, but they just dropped it off. I feel wonderful! I received an honorary doctorate once before because I do so much for the church and for the people. I have a love for God and I will receive my second one! I would rather give you my last dollar and be in the red, and drink water today, because I know that God will make a way for me in the morning. I do a lot of things in private, and I do not look for credit from man. I am grateful, and humbled to be acknowledged.

Kings Recordings Entertainment is a self-sustained label that houses its own recording studio and looks forward to expanding with in-house podcasts, videography, and photography studios, so that all resources are in-house for its artists and others.

King, who consistently gives credit to God and his faith for his successes, says that he bases his business on the fulfillment of God’s glory. 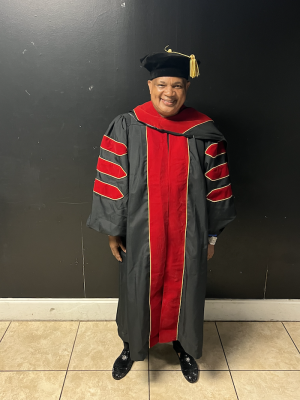