Chicago native, David Davis grew up listening to Motown classics, performing in his church, and overall showcased the he true star he is through his musical talents. Known as the winner of NBC’s Songland, he captivated the hearts of many for his ‘pop-soul’ voice and effortless ability to truly shine on stage. Just recently, Davis released his brand new single, “Ocean.” We caught up with the young star to discuss his experience on NBC’s hit music competition show, his brand new single, and what all he’s got planned up his sleeve for us.

How was your overall experience on NBC’s Songland?

My experience on Songland was really incredible. It was such a unique and powerful experience for me to work with such incredible producers that I’ve respected for such a long time. Ryan Tedder has been kind of been involved in all aspects of music. He’s spent so much time with me and mentored me throughout the process. That time we spent together was just really powerful. It gave me a lot of vision for the future. Really, it was such an incredible experience. 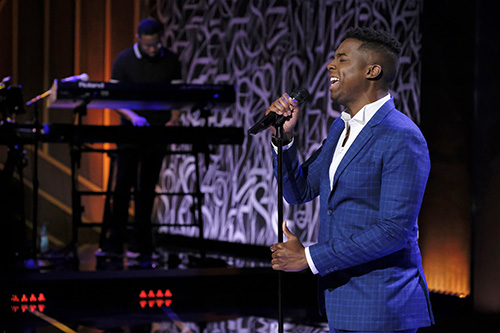 How would you describe being the opening act for Jon Bellion?

Being the opening act for Jon was really cool! Opening acts are always so rushed and crazy. You have 20 minutes to try to connect with an audience. Getting to perform for his band to our soul musical with deep lyrics and passionate vibes was song fun. They were super receptive and that’s because Jon is able to gain an audience that allows difference music. He’s such a nice guy and a talented musician.

Can you tell us about your recently released single, “Ocean”?

“Ocean” is an interesting story. I wrote it about a long-distance situation a few years ago. I was on a Tinder date and we really hit it off, but this guy was from London. He was only there for 24 hours so we had this crazy experience. I didn’t know if I had met my person or not and I questioned whether it would work or not because he’s so far away. The next day, we were talking as he landed in London and I joked that there is just an ocean between us (laughs). It taught me in that moment that there is a way to get through really difficult times by playing it down a little bit (laughs). I feel like we should all look at what is important, which is being and having good communication and conversation. Obviously, that phased out but as I did this long-distance thing with my boyfriend now, it’s shown me that I really have to take my own advice from that song. There’s a lot of space between us at this point. All we have to do is focus on what brought us together and that’s love. We’re sticking it out until we’re on the other side of it.

Right now, I’m working on two projects. The first is my sophomore album, Future Fortune which will be out in 2021. I had to put a bit of a pause on that because I received an offer to write for this Christmas special in December. My next release will be called “Hope For The Holidays,” which is going to be a three-song holiday EP.