Thomas Q. Jones has recently been gracing our television screens as he portrays the oh-so-fine love interest of Mercedes on the hit show, P-Valley. Thomas Q. Jones is no stranger to television though. For 12 years, he played football in the NFL. After a publicist pointed out Jones’ natural talents, he decided why not? I know I can speak for many fans of the show when I say, we’re glad he made that transition over to entertainment. We caught up with Jones to discuss his character, Mane in P-Valley, upcoming projects, and more.

What made you want to make the transition from NFL to entertainment?

When I retired, I wasn’t sure what I wanted to do. I played 12 years in the NFL. That’s something I did pretty much my whole life. I kind of fell into acting. I began producing this project and the publicist for the project was impressed with my acting. She felt like I had a natural ability, so she convinced me to pursue it full-time. I found an agency and I began going to more auditions back in 2013.

Tell us about your role in P-Valley.

It’s a cool role. I get a chance to stretch my legs as an actor. I’ve been doing this for about six years full-time. It has been an incredible experience, but this character gave me a chance to really dive into a specific role for this series. There interesting world of colorful characters with different accents and it gave me a chance to practice another accent. I’m from Virginia and in my travels to different cities, I’m kind of good at imitating people. I worked with a dialect coach for this character. It was so fun portraying my character because I got a chance to explore the accents of people from the south. He’s a character that was mysterious in the first season.

What can we expect to see this season?

We’re at the halfway point. The story lines are starting to become alive. You can see more of these characters’ lives unfold. You also see what everyone’s secrets become unveiled. Mane and Mercedes (portrayed by Brandee Evans) have a great bond. I can’t tell you what’s going to happen but there are some interesting things happening for these characters. By the time you get to the end of the season, you will be ready for season two for sure.

Quarantine life has been awkward (laughs). I’m usually in Los Angeles. I have a home in Florida, my main residence is in Miami, but I am in Los Angles most of the time. In LA, you’re constantly on the go and interacting with others. I’m producing my own television shows and films through my production company, Midnight Train Productions. When you live in that world, you’re constantly on the go. I’m all over the place. What I find to be pretty dope is that even though I’m in quarantine, I’m still just as busy. There’s Zoom calls, phone calls, people in Hollywood are still moving and shaking! They’re still being shown, people are connecting the dots, and relationships are being made. Even though I miss being around people and the energy of Hollywood, I’m still able to get a lot of things done until things get back to normal.

What can we expect to see from you in future?

I have a television show that I sold, I can’t give specifics, but it will be announced soon. I have a show that is really dope, I served as executive producer with my partner, Deji LaRay and I’ll be starring in the show as well. I’m really excited about that. I have a couple feature films in the works. There are cool projects on deck and I’m really into producing and creating my own content to build more relationships. 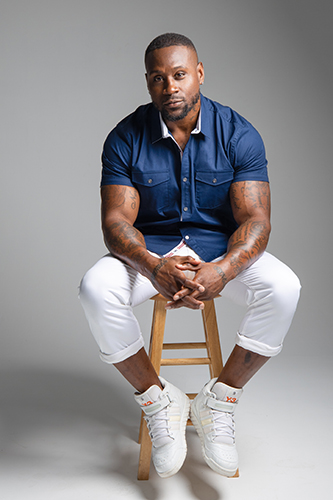 All images by Tatan Zuleta