Reiki Practitioner Maroon Arabaifaloba Is Giving Away A $100,000 College Scholarship.

Hailing from a Caribbean Indian, African, Native American, Jamaican and Cuban bloodline Maroon Araba Ifaloba has been highly sought after for over 30 years. The Brooklyn and Bronx native, was accepted into the black hawk tribe under Chief Blackhawk San Carlos who was also a grand master of his own martial arts system which has been featured in black belt magazine. Chief Blackhawk sons later went on to found “The Guardian Angels”.

During Father’s Day weekend, June 16th-19th 2022 the High Priest will be holding an Energy Therapy and Healing conference at Stone Mountain. The first of the conferences 5 stops will feature World renowned motivational speaker Fatima Abdul Johnson PHD , Hip hop’s hypnotherapist The Brain Bully , tattoo artist , sex therapist and Maroon Araba Ifaloba The 3 day event promises to help participants Cleans their energy and reconnect with their inner selves. Proceeds from the event will be used to fund an $100,000 college scholarship. 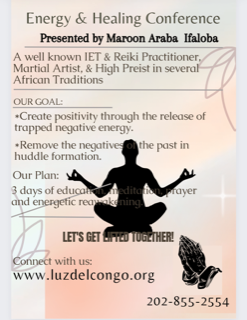 Maroon Araba Ifaloba previously worked as a vip protection agent. He secured Tupac Shakur after he received 5 gunshots in NYC while he was recovering from critical injuries. His protection work has been sought after by many high end individuals and celebrities. Maroon Araba Ifaloba is the founder of Maroon energy therapy, and also specializes in Spiritual Protection work, cleansings love work, justice work ,luck work money work, court cases ,law suits and much more. His dedication and commitment to helping others who seek his services has lead him on an extensive path to knowledge.