You know it’s a function when the ICY GRL steps in. Saweetie has been having a standout year, most recently celebrating not one but two Grammy nominations. The Bay Area native is up for Best New Artist, and her song with Doja Cat, “Best Friend,” is up for Best Rap Song at the 2022 Grammys. And of course, with Super Bowl weekend taking over Los Angeles, it’s only right to celebrate!

On Saturday, February 12th, Saweetie teamed up with Jack Daniel’s to host her official Saweetie’s Pre-Game Brunch! Taking over the rooftop at The Godfrey Hotel in Hollywood, the event was met with gorgeous LA weather in the high 90’s, reeling in nothing but good vibrations as attendees awaited the superstar herself. The drink menu included Bora Bora Bellini, Saweet & Sour, Paris In Pink, Ice-Rita, and Frozen Aisu Kohi, with various hors d’oeuvres and yummy desserts for all the guests. 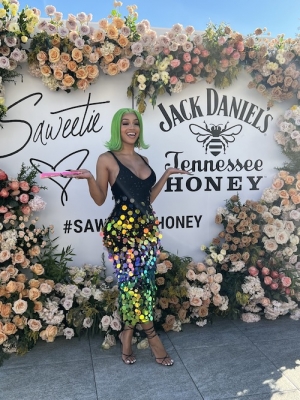 Saweetie stepped in rocking a gorgeous black dress, accented with bright, multi-colored sequins down to the bottom, pairing perfectly with her bright green hair and open-toed black heels. Celebrity sightings include Serayah, London On The Track, Muni Long, and many more.