Nivea’s highly anticipated comeback era is finally here, and the Grammy-nominated singer is using her past experiences to inspire women to stay true to themselves. The Don’t Mess with My Man singer dominated the music industry with her self-titled debut album in 2001 and has been authentically herself in an industry that consistently attempts to alter black women artists’ sound and appearance. Nivea’s journey consisted of trials and tribulations. Still, it’s her strength to prevail that fans are inspired by. As an advocate for the respect of Black women in music, the original IT girl is back and better than ever.

What was your initial reaction to the music industry as you became the ‘IT GIRL’?

The initial reaction was shock but not much of a surprise. I’ve worked hard since the age of 14 in the studio to get in a position of being a respected artist and songwriter. My work ethic back then and even now was top-notch, so that kept me grounded and focused on being a great artist. At the time, though, when I first emerged as an artist, I didn’t feel like the IT girl because I felt I wasn’t accepted or highly publicized by my own community. I was pushed to the pop category due to the way I dressed and how I wore my hair which wasn’t the norm for black female artists back then. I never felt like an It girl then, but I feel like one more so now because things I did 20 years ago are now trendy and popular. 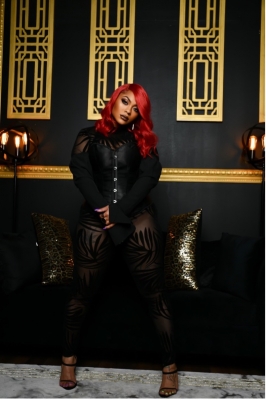 Many women look up to you because of your strength and determination to prevail against negativity. How did you survive your most challenging moments?

GOD. I’ve been in the lowest points in my life, and because I know GOD is real and has gotten me through tough situations, it has kept me grounded against negativity and my determination to succeed. When you’re really low and struggling, you are weak, and I felt like I had nothing left to pull from but learning how to be aware of yourself and the guidance of GOD and how he spiritually talks to you it puts everything in perspective. So, I say praying for strength. Clarity has helped me along my journey to prevail.

Industries often try to force Black women into a box. How did you deal with unrealistic expectations and scrutiny?

I’m still dealing with that, unfortunately. I’ve learned over the years, even early on in my career I would go with what was advised for me to do instead of what I wanted, and as an artist, it can hinder you from growing. I came into the industry being me. Nobody created my image; however, it was a lot of control over what I recorded or my music, and I didn’t like that l. However, I dealt with the expectations. Now, as an adult, I’m more focused and set on my own expectations for myself and what I want. I always put everyone first over me, and I can’t do that anymore. I don’t live up to unrealistic expectations. If you’re in the entertainment business, you have to live up to your own expectations. How can you live up to anything for someone else? It has to be you first!

Everyone is obsessed with your newest single, ‘Virginia.’ How imperative was it for you to release new music?

Music is who I am. People who are looking forward to me making new music and as an artist make it imperative for me to do it. I’m re-emerging back into music, and it’s important for me to give my fans great music, which is why I released, Virginia. I’m a creative person, and I love expressing myself. I felt like now is the perfect time to do it, and I can’t wait to share my music and my upcoming album.

What can fans expect this year? Are you trying a new sound or sticking to your roots?

Fans can expect new music along the lines of R&B and Hip-Hop. This album is heavily R&B & Hip-Hop but will show a creative side of me. I feel as an artist, sometimes we are placed in a box and put into one category or thing, and I’m not one of those creatives. I want to do everything, and my music will reflect that. So, with this album, I plan to be a little more creative.

Lastly, for the young women who are blindsided by the glitz and glam of the music industry, how should they protect themselves?

In today’s society, everyone wants to be famous, beautiful and pretend to be perfect, and I don’t know if you can protect yourself if that is everything to you. If that looks like GOD to you or you see the glitz and glam as important over your life, then the best way to protect yourself is to get more grounded on what’s most important in life and what matters the most outside of social media fame or glitz and glam. What do you want to accomplish in this life? How do you want to be remembered and impact the world once you’re gone? If it’s all about bags and shoes and fame, protect yourself by praying and getting to true meanings of happiness outside of materialistic things.