Sir Daniel Winn’s Instagram bio reads: “The only true measure of our lives is the positive influence we have in the lives of others and on humanity as a whole.” A true multi-hyphenate, Sir Daniel Winn is an internationally known blue chip artist, fine art curator, philanthropist, and entrepreneur, who created his own gallery called Winn Slavin Fine Art located on the famed Rodeo Drive in Beverly Hills.

Using a mixed-media approach to his art, Winn was a child refugee from Vietnam whose main focus is to express his artistic philosophy of Existential Surrealism. His designs are as complex as his creativity, and he continues to push the boundaries in the realm of art as a whole.

Most recently, Winn teamed up with couture designer Guo Pei, who’s best known as the “Gucci of China.” She’s also responsible for Rihanna’s legendary trailing yellow dress at the 2015 Met Ball. The two had the opportunity to conjoin forces in creating surrealist pieces of her couture, which exhibited at the Bowers Museum.

Additionally, Winn recently ventured into the NFT space, reminding audiences the importance in digital collections and how it will affect the value of traditional art.

Sheen Magazine caught up with Sir Daniel Winn via Zoom, who was posted in his corporate office in Anaheim. Read below as we discuss his background, his relationship with Guo Pei, going into the NFT space, a future collab with Alexander McQueen, a forthcoming movie based on his life, and more!

For those who don’t know, who is Sir Daniel Winn?

I’m a unique artist who’s also a business person. In addition, I am a philanthropist who wants to communicate a message to the world during my lifetime about universal truth and what we can do for others before we leave this world. How do we want people to remember us? For our good deeds and the positive influence we have on others. In essence, people call me a modern Renaissance artist or a modern Renaissance man, a philosopher and an artist. I love science, math, and the medical field. I love music and all forms of fine art and performance art. What I want to do is share my vision so that future generations can have a better understanding of my philosophy and my purpose of existence during my lifetime.

Talk about your recent collaboration with designer Guo Pei.

Guo Pei is a very famous couturist who’s considered a Chinese treasure. In Asia she has the same recognition as Gucci, Hermes, Chanel, and Louis Vuitton. She is recognized for her artistic creations in couture clothing. Guo Pei was the one who created the canary dress for Rihanna at the Met Gala a few years back, which is iconic. Her dresses are featured in museums worldwide — some are in the millions of dollars and not even available for acquisition. I had the privilege to collaborate with her about 3 years ago for an exhibition at the Bowers Museum — a premiere exhibition of my painting collection inspired by her artistic creations. Her couture along my inspired paintings were exhibited at the Bowers Museum and at Winn Slavin Fine Art gallery in Beverly Hills. This year, I was again approached by the Bowers Museum to potentially collaborate for the fall of 2022.

What can we expect from this collaboration?

The collaboration I did with Guo Pei a few years back was more of a retro, Renaissance medieval style. I created paintings of her couture based on my vision of Existential Surrealism. One of the paintings was submitted to the International Mondial Competition — a world competition with over 50 thousand artists worldwide and 45 international judges. I won the Gold Medal for a painting inspired by Guo Pei’s rose dress. My creation was more of a classical Renaissance interpretation with a contemporary flair. Currently I’m working on a series of paintings and sculptures entitled “Quantum Mechanics.” These works are more of a mathematical equation that visually communicates universal truth. For the collaboration with Guo Pei this fall, I will incorporate my current visions of Quantum Mechanics. Interpreting the mathematical compositions of her couture design by using the Fibonacci sequence and Golden Ratio, my painting and sculptural creations will hopefully communicate a better understanding about my philosophy and of universal beauty. 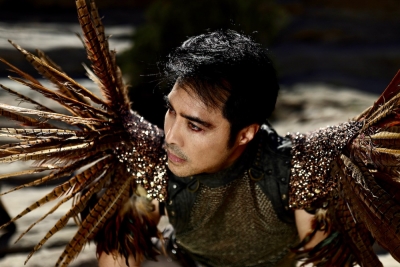 Talk about the NFTs that you’re launching.

This year is exciting because we’re collaborating and launching with a major company to do our own platform for NFTs. It’s a software that would allow artists globally to connect and be recognized through our agency. I’m represented by Masterpiece Publishing, an artist agency that in the physical art world has been around for 25 years. In the NFT space collaborating with Masterpiece Publishing, we will have a virtual presence that will represent artists internationally. We want to incorporate the NFT authentication of my artwork, and other artists’ works in the virtual gallery as well. We’re in a brand-new world of collecting art — a new generation of authenticating art and how to preserve digital art. I am ready to be a pioneer in this exciting journey.

How was it opening your own gallery in Beverly Hills? That’s so beautiful.

A rodeo gallery space in Beverly Hills has always been a dream of mine. We were able to make it happen much more quickly than expected. The owners of 2 Rodeo Drive were very excited to have our prestigious gallery on their property and gave us the opportunity and a deal we could not refuse. We are fortunate to have the crown jewel location of the most prominent real estate in the world. This gallery space presents the art exquisitely and has received praise from many international visitors.

What can we expect from your collab with Alexander McQueen?

Anything else we should be excited for?

Last year I created the new re-envisioned statuettes for the Asian World Film Festival for their awards. I created the Snow Leopard that was given out to the best director, best actor, best actress, and six other award recipients. In addition, I also created four other statuettes including the humanitarian and lifetime achievement awards. These statuettes will be used for years to come. During this project, I met very prominent film producers and directors that have done award-winning blockbuster movies. In process is a movie based on the story of my life. It’s about the angst and struggle of abandonment of a child in Vietnam with his mother and grandmother, and ultimately escaping to United States in 1975 to become a successful artist. I’m very excited about this endeavor. My agent, manager, and publicist have greenlit this project. We are in the process of developing the script with an Oscar-winning writer. Once the script is finalized, production will begin. The movie will be a feature, semi-biographical history of my life. I’m very honored and excited that these award-winning writers, directors, and producers are involved.

I have many projects coming up this year as well, including several art fairs. There’s a lot of other exciting things with the Asian World Film Festival in process too. And this November I will be unveiling several monumental sculptures from the Quantum Mechanics series on Rodeo Drive. There are numerous other projects in the works and I will be announcing them as they develop. Stay tuned for unprecedented surprises!