Social influencer, Lionel B is taking a different approach in 2021 when it comes to branding, business and socialism. I had a chance to sit down and talk to him about the state of Black Creatives making spaces and his opinion on where being an influencer is going.

What made you want to get into the influencer game?

Honestly, I never really sought out to be an influencer. The fans chose me and made me famous by subscribing to my YouTube Channel The Lionel B Show. I initially just wanted to see what it was like to get one viral video to hit 1 million views, and the fans made me super viral by giving me 88.6 million views across my channel. I have several videos over 1 million views now. It’s surreal but I’m embracing the influencer life more and more each day. It’s definitely a lot more expectations placed on you when you reach that level.

The video that went viral with Jay-Z and Beyoncé, did they reach out after?

That is my most viewed video, and surprisingly no they didn’t; however, By the time it was at a million I’m sure they heard about it. Now that it’s at nearly at 8 million views they haven’t used their forces to blackball me yet, I don’t think (laughs).

How have you been able to use your platform to add to the conversation on the importance of Black Creatives creating a space at the table?

I think I absolutely completely represent the change I want to see. Many times, I’ve wanted to collaborate with people in the same lane as to make the network bigger, but with other influencers I’ve come across they are very competitive and hate to see others in the same lane winning that’s just my opinion, but I love to see us all win together as a community. 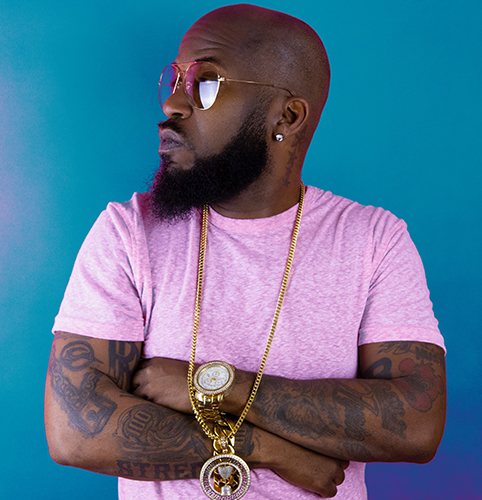 Do you think influencers have a duty to their supporters to involve themselves in political conversations?

I try to limit my views on political conversations, and the reason is that YouTube shadow bans those convos or make it impossible for you to monetize that type of content. I definitely have my views on politics, and I think Trump was the worse President in the history of the United States and possibly our lifetime. Hopefully Biden can clean up the mess and not just promise us change.

How has the influencer game changed over the years?

I think with the change of social media, influencers are way more accessible than ever before. Back in the MySpace days it was a rare thing to connect with influencers. Even with YouTube I get so many comments I can’t possibly respond to everyone. Instagram and Clubhouse allows you direct access to influencers now even if we pretend we don’t see it, sometimes we do.

Who’s one artist you would love to work with?

All of the greats from the 90s and early 2000s those are artists I grew up listening to. Well let me not say all of them, because they have a certain style that’s not really like mine. I’d say Dj Quik, Jeezy, Yo Gotti, Bun B, Fat Joe those type of guys that remain timeless and are able to reinvent themselves.

Have you ever thought about doing reality television?

Yes, I actually pitched a reality show to a few heavy hitters in Hollywood and they loved my idea and concept, so I’m just waiting on the green light. It’s not people will except, not too messy with the drama hopefully. But you will be seeing Lionel B on the big screen soon.

All images courtesy of Lionel B