She’s the “Original Bad Girl of Comedy,” and stand-up comedienne Luenell certainly lives up to her title. On Sunday, May 15, 2022, she brought more laughter once again when and where it was needed – that is, on the pink carpet of the 14th annual Pink Pump Affair, held at the Beverly Hilton in Los Angeles.

Luenell was among the 350 fashionistas to dress in their Sunday best for the annual charity event, hosted by media personality, civil rights attorney, and child advocate Areva Martin. The annual charity event benefitted the Special Needs Network (SNN), founded by Martin, which raises money for special needs children and families affected by autism and related development disorders. 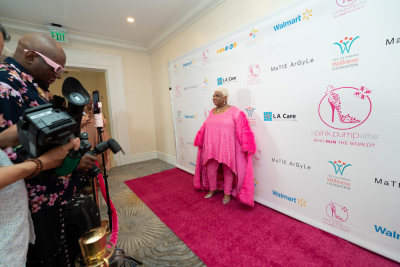 The fun-filled afternoon kicked off with a champagne reception, a live auction along with an awards show, honoring women of distinction. Plus, a fashion show, featuring size-inclusive clothing brands from African American designers, was presented by MaTte ArGyLe, a Black-owned boutique at Runway Playa Vista as well as streetwear designs by Journey Carter, a Gen Z emerging designer. 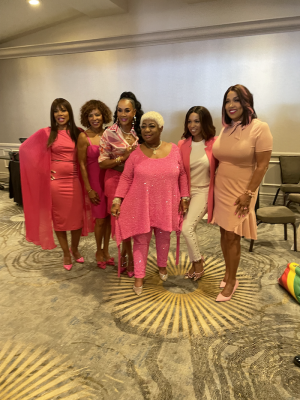 Luenell walked the pink carpet in a custom outfit that she co-designed with LA celebrity fashion designer Angela Dean. She stood alongside industry peers Wendy Raquel Robinson, a Pink Pump honoree; Vivica A. Fox; Elise Neal and Kym Whitney for an unforgettable moment in time.

When asked about her pink carpet look and to share fashion tips, the talented actress and comedienne, who has been on a whirlwind tour with Katt Williams, told SHEEN “In Vegas, it is like go big or go home, so I started getting some sparkly outfits made, and when I went on tour with Katt, I just got some more made, and now I have a beautiful collection that is really stunning to show off.”  Luenell just wrapped up a nine-month tour with Emmy-winner Williams, who is considered the King of Underground Comedy. His “World War III Comedy Tour” just started streaming on Netflix this week.

“For fashion, I’ll say you need to have a really good seamstress. You need somebody who can make you something because not everybody can shop off the rack. Then you have to have some good ideas about fashion and know your body. You need to what to accentuate and what to hide because I’m accentuating some things and I’m hiding some other stuff. And you also need to have some money because this s@$t ain’t cheap,” she added with her signature laugh.

A familiar face in many of our popular and classic Black films, Luenell loves telling stories through a lens about Black people. The vibrant and hilarious comedienne sat down with SHEEN to discuss what it was like touring with Katt Williams, plus, being a part of the ensemble cast in the films, “Coming 2 America” and “Dolemite Is My Name,” plus, so much more. 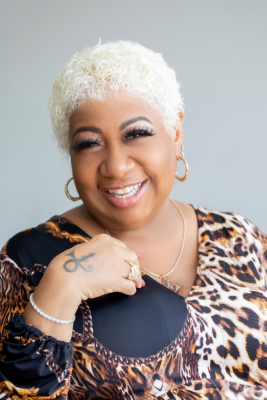 Right now, you just wrapped up a tour with Katt Williams. Tell us about that whole experience.

Well, it’s my second time, you know I was on tour with Katt Williams 15 years ago. I also appear on Katt Williams’ “American Hustle” comedy special. So, for us, it’s just like friends getting together for a few laughs, and we get paid to do it!! We have a great time. We love what we do, and it’s been exciting every night. We have our own tour.  We do sold-out arenas across the country. People are coming to see Katt and he’s pulling all these people to his concerts.  Then, when me and the other comics come out, it’s like another surprise. Mark Curry has been on the tour with us as well and many others. It’s been great!

I know this is your first Sunday in LA in more than nine months. From touring with Katt Williams and starting your own “Fresh Out of Favors” stand-up comedy tour, tell us how you stay mentally grounded when traveling on the road so much?

I think it’s the edibles. It’s got to be because I’m tired and I don’t know how I make it from one place to another. When you have responsibilities, you’ve got to show up. You don’t want to get a reputation of being a flake, so I just keep going.

We fell in love with you all over again with your role in 2021’s film “Coming 2 America,” the sequel.  What was it like working with Eddie Murphy and the whole entire cast?

It was my second time working with Eddie because I did “Dolemite Is My Name,” which is now on Netflix, before I did “Coming 2 America,” which is now on Amazon Prime. It’s kind of surreal that I shot two Eddie Murphy movies in one year! I felt like I was in some kind of fantasy … like this can’t be happening. And then to have everybody on set from Arsenio Hall, James Earl Jones, John Amos, Rick Ross as well as my daughter, Da’Nelle, who was one of the dancers in the movie, it was one of the happiest times of my life. Plus, we shot the movie at Tyler Perry Studio in Atlanta on land that we bought back from the white folks. Every day, we were surrounded by the sound stages of named after iconic legends in television and film like Cicely Tyson, Sidney Poitier and Oprah Winfrey. I was busting full of pride. It was a once in a lifetime experience that I cherish deeply.

We’re so excited about your upcoming stand-up comedy tour “Fresh Out of Favors.” What can fans expect?

Well, I think they can just expect what they’ve always gotten from me: the sheer, raw, honest and relatable stuff about weight and relationships. All my material is crossover and pretty mainstream, which appeals to everyone. It’s relatable to everyone; although, I speak from a Black female’s perspective. Everything that I talk about is something that everybody goes through in life at one time or another.  So, come out! Enjoy yourself. Laughs are on me!

ON A SOCIAL NOTE:

Wyllissa R. Bennett contributed to this article as editor.