Telli Swift is the definition of a boss babe, someone who shines and brightens any room she walks into. Boasting 1.1 million followers on Instagram alone, Telli is a proud mother, actress, entrepreneur, philanthropist, fempowerist, and motivational speaker — here to use her platform for the greater good any chance she can.

You may recognize Telli from the reality television series, WAGS Atlanta, that premiered on E! Network in early 2018. Since then, she’s founded her own non-profit called Boxing Wags Association, aimed to raise funds and help out a variety of causes, including women with breast cancer, children with autism, and those with Spina Bifida.

Telli also is the host of her own podcast called Telli Talks, which falls directly in line with her mission of helping women all around the world in empowering themselves. And with her unwavering love for fashion and beauty, Telli launched her own unisex fragrance line called D’Telli, in conjunction with her fiancé Deontay Wilder.

Sheen spoke with Telli to discuss her podcast, being a entrepreneur, the reality of dating a boxer, starting her own fragrance, motherhood, giving back, and more!

The name Telli Talks is so cute, have you always wanted a podcast?

Thank you. You know what’s crazy? They contacted me to do a podcast for Spotify that was interviewing only WAGS. I ended up going in another direction, and opened it up to guests of all different careers, fields, and businesses. I really wanted my listeners to get insight from a variety of individuals who can share their many different interests, passions, and stories.

I didn’t know that you were on a TV show!

Yes! I was on WAGS, that’s where Deontay proposed to me. I ended up getting pregnant on the show while we were filming, and he proposed at the finale of the show where we also had a gender reveal with a ‘gloves versus glitter’ theme. He punched a bean bag, and it was all glitter for our baby girl. It was so cute and amazing.

What does it mean to support Deontay Wilder? Because boxing is no joke!

Right now, he’s training in Vegas and then goes back to Alabama. I just try to be there for him and support him — obviously, you don’t want to see your man or anyone you love or care for get hit, period. Whether it’s in the face, the body, the arm, whatever. He’s in the ‘hurt’ business, so he’s going to get hit. Coming from a medical background, I can’t go up there and help him or ice him. It’s very stressful, it gives me a lot of anxiety.

I always tell people, I never had anxiety before I was with Deontay. I swear, I didn’t have gray hair. I didn’t stress the way I do now because you never know what’s going to come from a fight. You never know what bones will break. You never know the recovery process, the healing process. There’s people that go into comas. It’s that fear of not knowing what the outcome is going to be.

Fortunately, we’ve been blessed with more wins than losses. It’s having that mentality of he’s ‘in it to win it.’ Knowing he’s clear-headed helps a lot, but it’s not easy. People think WAGs are there to look cute, but it’s so much more than that. The behind-the-scenes before the fight of training, blood, sweat, and tears. The businesses, the responsibilities, the kids, and where their mentality is.

There’s a lot that comes with the business of boxing, as opposed to just being there at the fight. It’s so much deeper – these boxers go through so much people don’t know about. Even with the rigorous training, their body is going through so much wear and tear that it’s not supposed to go through naturally. It’s deeper than those 33 minutes of fighting. 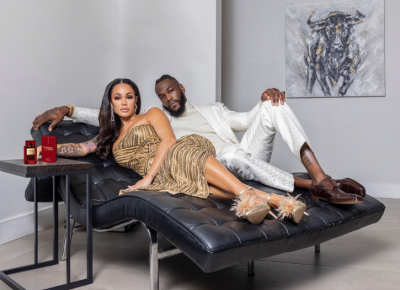 Do the kids worry too?

The kids look at him as a superhero, so they love it. They’re like “Daddy’s going to punch him in his face!” [laughs] My daughter will put gloves on and slam them together, so they’re all in it. They always want to go to all of the fights, but sometimes it’s in a far location or they’re in school. Sometimes they go, sometimes they don’t.

What is your medical background?

I used to do nursing here in Los Angeles. I used to do plastic surgery recovery and worked for a post opp recovery center. I did the ER in Jersey City Medical Center. Ever since I moved to Alabama, I realized I wanted to be an entrepreneur. The nurses there don’t make as much money there as they did in Jersey or Cali. I didn’t want to work 12 hour shifts every other weekend or holiday, not getting the same amount of funds I was used to making. I thought, alright, let me start my own business and go from there.

What does it mean to be this boss babe?

It’s important to have a mentor to guide you, to believe in yourself, to know that you’re going to make it regardless of the failures you do encounter. Because you will fail. Thinking you’ll start a business and not have any mistakes, hiccups, or ups and downs is unrealistic. With music, for example, if you make a song and it’s not successful, you stop there. In business, you don’t do one thing and think hey, it’s not selling or doing well. Continue to do it, believe in yourself, and push yourself to your full capacity until it becomes successful.

Talk about D’Telli Fragances, it smells so good!

This came about because when we were filming WAGS, everyone was asking us what we were wearing. At the time, it was Baccarat, which is a unisex fragrance. Baccarat was so expensive. If everyone thinks we smell good, we might as well come up with our own fragrance. Finally he said, “If you want to do it, do it.”

So I just did it, like Nike. I created this fragrance. By the time it came back to him, I said, “Alright babe, pick a font.” He asked, “What’s this for?” I said, “The fragrance.” He asked “Well, when are we gonna do it?” I said, “It’s done. It’s completely done, you just have to pick the font.” He loves it, we both wear it. It’s a way that we can connect when we’re not together. The motto of the fragrance is “where two souls connect as one,” and we connect through the scent of smell.

Are black and red your favorite colors?

It’s actually gold and red. The gold signifies luxury, the red represents passion and love. We’re giving away free samples, so if you want to try the fragrance, you can go to our website. It’s amazing. It’s strong, so you don’t need much. There’s a small bottle and a big bottle. The small one you can take to travel with you anywhere, the bigger one literally lasts a year because you only need one or two sprays. I wanted to leave a trail of scent when I walk, where others will ask, “What does she have on?”

You have candles too right?

Yes, I just started producing D’Telli candles that are scented, too. The candles come in black matte and a gloss gold but haven’t been released yet because I’m still working on the engraving process. Everything that I do is unisex – I try to make it genderless so everyone can enjoy it.

Where can people get the fragrance?

They can shop it at dtellifragrances.com. We updated the website so everything is brand new, super clean, and classy.

How do you balance motherhood and everything you do?

My 4-year-old daughter is on YouTube religiously. She called Deontay, and he said “Where’s your mom?” She said, “She’s at Telli Talks Business.” [laughs] I’m like “What?!” It’s crazy how much they know. You have to watch what you say and do, because they’re definitely watching you for sure.

How was it speaking at the Health Tech Summit?

The Health Tech Summit was amazing! We had the Chamber of Commerce there and the man that builds franchises like Fantastic Sams. It was more so showcasing the collaboration side of business, how you can collaborate with people and grow a business. It’s essential to work with other people because it takes an army. You can’t do everything by yourself, it’s impossible. It’s too much to do alone. But trusting people to help you is the harder part in having a business or collaborating – to make sure they’re doing their part, as well as you’re doing yours.

When you’re building a business, it’s your baby, not anyone else’s baby. Nobody wants to grow it more than yourself. You want to collaborate with a product or brand you believe in. I never promote anything I don’t use or try myself. I like to promote things that I use and like. Whether it’s Fashionova, a fitness brand, beauty products, facial products, I use everything that I promote religiously because I wouldn’t promote it if I didn’t.

I love all that you do for charity. Talk about starting your own Boxing Wags Association.

Thank you. We do all types of different events to raise awareness and funds for breast cancer, Spina Bifida, autism, children transitioning from youth to teenage years, and more. Our association is not just one organization or one charity we can help, as there are so many different causes around this world.

I recently did a prostate cancer event. Me and Deontay started golfing not too long ago and we’re super into it. My dad’s a golfer and I felt inspired by him. It was my first male-dominated golf event. It was amazing and sold out! We had all types of celebrities there – it was so much fun, and I can’t wait to do it again. It was a super successful event, as we were able to raise a lot of funds.

I’m helping with an event on October 1st that raises awareness for youth and young adults and fights to end sex trafficking. I can’t wait to help in any way I can, because sex trafficking is a huge issure right now. We’re working with the GIVE – MENTOR – LOVE Foundation, and they’re teaming up with L.A. County to help stop sex trafficking.

Good for you! That makes me so happy.

Thank you. I always say, “If we’re able to help, why not? We have this platform, so why not use it for good? Why not bring light into the world?”

Tune into Deontay’s fight, October 15th in Brooklyn at the Barclays Center. We haven’t been there in a minute, and we’re super excited to go back. I love New York, so I can’t wait for that. If you want more information on the October 1st is the sex trafficking event, if you want more information you head to my page. If you want to watch my podcast, Telli Talks, it comes out every Thursday.