Terrell Mackey on His Single, “My Way” & What You Can Expect to See From Him In the Future

Soulful artist, Terrell Mackey is known for making music that not only gets people up out of their seat but gets them thinking as well. His vibe and energy as an artist is not only admirable to us but also his thousands of listeners across the nation! We caught up with Mackey to discuss why he chose to pursue music, his single “My Way,” and much more!

Why music? When did you know this was what you wanted to pursue as a career?

Why music? Man, why not music? Music shifts emotion. It’s something that can transport you into any state of mind of what it was when you first heard the song, that’s what I like about music. When you hear a song that you may have fell in love with a while ago, it will bring you back to that moment. I like music because it makes me feel good and I like making other people feel good. I want to make those moments for people and help them remember great memories. That’s a big part of why I do it.

I started music back in 2008, that’s when I started singing. From there, it kind of opened up and turned into a full on career for me. Singing, songwriting, acting, the whole entertainment scope is my thing.

Tell us about the inspiration behind your single, “My Way.”

The inspiration was basically like finding myself in a state of just being in my head. Creatives, we think and overthink at times. That’s where I was at when I made “My Way.” It was me contemplating whether or not one could find peace when they’re in a dark place and in love at the same time. In this day and age, we have a lot of people who are dealing with everyday issues that have been viewed as anxiety. My generation is riddled with a lot of anxiety and depression. A lot of times people find themselves sitting and wondering because it’s such a superficial world now, you’re going to have find your own genuine love. That’s kind of how I came up with the song, there was girl that I’ve been in love with some time, but things just weren’t adding up. Life wasn’t taking me in the direction where I was going with her. It’s a mental note to myself, to get it what you want, how you want it and from there you can breakthrough. I heard Will Smith say one time, “You can’t love someone else without making sure you’re A1.”

Overall, I’m fun. I can be deep at times (laughs). “My Way” is a pretty deep song. I just like to make people move; I want to get you up off your feet. I want to make you dance and make a memory. As an artist, I’m big on performing live. I love performing with a band, make moments with the audience, and leave messages in my music that’s more than just a surface level thing. I like to make songs that will have you walk away humming. My aim is to always make something catchy.

You can expect to see a ton of different videos, more content like short films, and more performing. We’re about to really go hard when it comes to festivals and performances. I can’t wait to do my first stage dive (laughs). I’ve been working on the jumping everyday (laughs). 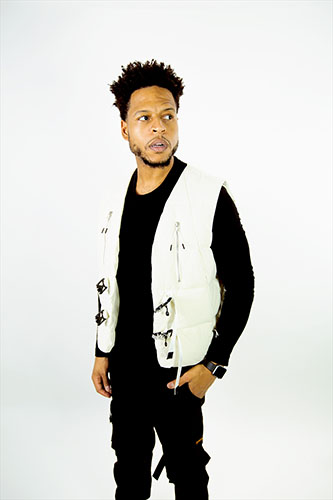 All images by Paul Jacobs for PeteyShotya