SHEEN correspondent, Rachel Mbuki and Sheen International Photographer Mark G were on hand last night to cover the 13th installment of the annual African American Film Critics Association Awards (AAFCA). Held in Beverly Hills at the luxe SLS Hotel, the event was well attended by a star-studded roster of the who’s who in black Hollywood as they gathered to celebrate the nominees and winners of various categories from the most popular films produced in 2021. Hosting the awards were syndicated Radio Host, Charlamagne Tha God, Actress, Alesha Renee, and AAFCA President, Gil Robertson. Several stars graced SHEEN on the red carpet for exclusive interviews. 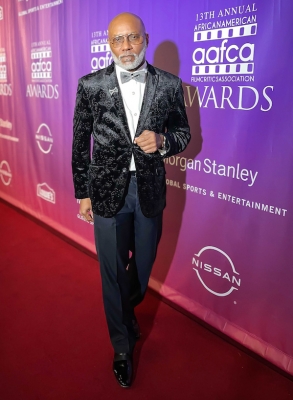 Sherri Shephard stopped by and shared how humbled and excited she was for all the amazing opportunities she continues to get in the industry. She spoke of having had many doors closed on her throughout her career only to end up with more projects than she can sometimes handle 18 years later. “God’s timing is everything”, she mused to us. She also shared with us how grateful she was to Wendy Williams for allowing her to shine as her stand-in host and expressed how excited she is about her upcoming self-titled talk show in September. Telling us about Jennifer Hudson’s upcoming talk show, the multi-talented Actress and TV personality also gushed about how phenomenal it is that 3 black women (Shephard, Tamara Hall, and Hudson) will be dominating daytime television with their self-titled shows. She looks back fondly at the time she graced our SHEEN cover gashing that it was one of the best cover experiences she had ever thanks to our great SHEEN team.

SHEEN also had the pleasure of catching up with another one of our Cover stars Jay Ellis. The first thing he wanted our audience to know was that HIS cover was the best one SHEEN had ever done, admitting cheekily that he was obviously biased. Dressed to the nines in a local Los Angeles designer he tells us about how his dapper ensemble came together then goes on to tell of his impressive upcoming projects, including the film ‘Top Gun’ premiering in May as well as another film project coming in the summer. The star is making it clear that HBO’s ‘Insecure’ was just the beginning of an illustrious long Hollywood career for him. 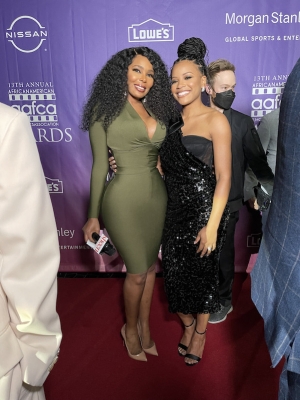 While on the Red Carpet, we also caught up with Ms. Aunjanue Ellis, the actress that has been taking Hollywood by storm this season after her amazing performance starring alongside Will Smith in the role of Brandi Williams, Serena and Venus Williams’ mother for the film ‘King Richard’. She tells us what process she went through that had her embody the character so seamlessly well. We also got to chat with her teenage costars, Danielle Lawson and Layla Crawford who played Ellis’ daughters in the blockbuster film. They chronicled what a phenomenal experience it was working alongside Will Smith and getting to meet the Williams sisters as well as what the high school experience is like for seniors that also happen to star in one of the biggest films of 2021. The brilliant young ladies are certainly heading to higher places and they tell us about their future college and career plans.

Other great moments on the red carpet at AAFCA 2022 include when Director of the 2021 Netflix Hit film ‘The Harder they Fall’, Jaymes Samuel, stopped by and gave us a hilarious account of how he came about casting Comedian, Actor Deon Cole (Black-ish)- who also spontaneously joined the interview- in his role as Wiley Escoe. Six-time Grammy Award winner, Terrence Blanchard stopped by and told us about his incredible fete; headlining an opera show at the Met in New York and being the first-ever African American to do so as well as his two upcoming Grammy and Oscar nominations respectively.

Other notable appearances on the red carpet that had an interview with SHEEN included Mr. Stanley Nelson, director of the highly-rated documentary film Attica, now showing on Showtime who was a nominee for both “The Best Documentary” and “The Stanley and Karen Kramer Social Justice Award” awards, Jeffery Robinson Director of the film ‘Who Are We’ and “Best Independent Feature” nominee, Sony Pictures executive Nicole Brown, there to accept “The Vanguard award” on behalf of the company, Mrs. Karen Sharpe Kramer widow of the late producer/ director Stanley Kramer- both of whom “The Stanley and Karen Kramer Social Justice Award” is named after- accompanied by daughter Kat Kramer, Actress Cassandra Freeman- currently portraying the role of Aunt Viv in the much anticipated ‘Fresh Prince of Bel-Air’ remake ‘Bel-Air’ now showing on Peacock and Actress Chanté Adams, one of this year’s Essence honorees and star of upcoming Amazon Prime series ‘A League of their Own’.