The Basilica of Our Lady Of Peace, An Outstanding Architectural Building

Yamoussoukro, a town in the centre of the Ivory Coast with a population of 300000 inhabitants, the country’s political and administrative capital, situated about 240 km from Abidjan, was chosen by the President of the Ivory Coast Felix Houphouet-Boigny for the construction of the Basilica our Lady of Peace in 1983. To mention that the basilica is the largest religious building in the world and remains a devout place of Catholic faith in Africa with an appearance reminiscent of that of St. Peter’s in Rome.

Built on a piece of land of one hundred and thirty hectares by late President Felix Houphouet-Boigny, on February 04, 1986, the Basilica of Our Lady of Peace of Yamoussoukro was built by 24 national and international companies between 1986 and 1989 and was consecrated by Pope John Paul 2 on September 10, 1990. The pastoral care of the Basilica is managed by the Fathers of the Society of Catholic Apostolate. The cost of the work is estimated at 40 billion CFA (122 million Euros, or 6% of the country’s annual budget) which led to controversy. President Houphouet-Boigny replied that the building had been financed on his personal fortune. 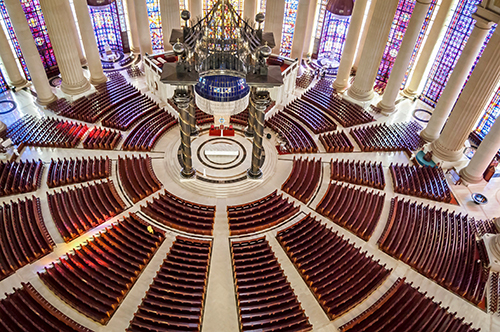 On August 10, 1985, the foundation stone of this architectural building was laid and blessed by Pope John Paul 2.In terms of its capacity; the Basilica of Our Lady of Peace can hold eighteen thousand people seated and eleven thousand standing. A total of 4,500 workers, including 1,500 Africans, worked on this masterpiece. The basilica is inspired by 13th century Greco-Roman and features an impressive number of concrete columns; inside this architectural building, there are seats that diffuse an air conditioning system. Tens of thousands of worshippers can be accommodated on its forecourt and under its gigantic carved columns, with 35 metres wide than the one of St. Peter in Rome, making it one of the largest and the highest in the world. Eighty four thousand square meters of stained glass windows of five thousand different colors surround the sanctuary, separated into twelve rectangular bays. Two of them are chapels, one of which is dedicated to Virgin Mary and the other to Saint Joseph. The basilica has the largest stained glass area in the world, with work that has been carried out over 18 months period, i.e. 1 year 6 months. Nine themes are covered, spread on the three main levels: at the top of the dome, there is an impressive stained glass window of 40 meters in diameter that symbolizes peace, in the center is a dove with outstretched wings, from which emanate rays of lights of this basilica elevated to the glory of Lord our God. In the secret of tradition, but also to respect  the tradition of cathedral builders, patrons and speakers appear on one of the stained glass windows; the entry to Jerusalem: President Felix Houphouet-Boigny , as well as representatives of the major works and construction companies of the Basilica among the pilgrims. It should also be noted that it was a team of fourteen nationalities who worked for the creation of these stained glass windows, illustrating the name Basilica Our Lady of Peace. All characteristics are shown the importance of this foundation.

It’s hard to want to go sightseeing in Ivory Coast without getting in mind to take a tour of the Basilica to discover and appreciate the outstanding religious building in Ivory Coast. Since the opening of this masterpiece, many European, American and African tourists come to visit this holy place. Christians honor Almighty God through the intercession of Virgin Mary. This religious building remains a true cultural heritage. The serenity of this holy place is expressed by the beauty, the architectural harmony of the lines, the tranquility of the gardens, and makes us think of almighty God.

Ivorians are proud of this outstanding architectural building, bequeathed by late President Felix Houphouet-Boigny, father of the nation. See you soon for the discovery of another monument.