The Crown Coalition Declares July 3rd, 2020 as National Crown Day to Mark the 1-Year Anniversary of “The Crown Act” Being Signed

Moving Forward, The Crown Coalition Is Expanding Its Work Beyond Race-Based Hair Discrimination to Address Other forms of Racial Discrimination

The CROWN Coalition, a national alliance founded by Dove, National Urban League, Western Center on Law & Poverty, and Color Of Change is declaring July 3, 2020 as National CROWN Day; the 1-year anniversary of the signing of The CROWN Act in California. The groundbreaking legislation, sponsored by the Coalition, was first introduced by Senator Holly J. Mitchell in January 2019 and signed into law by Governor Gavin Newsom on July 3, 2019. National CROWN Day will be a day of solidarity for the human rights of Black men, women and children to wear their natural hair boldly and proudly, without the fear of being discriminated against in school or the workplace. The one-day celebration will feature a full day of virtual conversations and people are encouraged to #PassTheCrown and sign the petition to end hair-based discrimination at thecrownact.com.

The Black community has always had a strong tradition of passing down stories, history and cultural pride to shape future generations on what is important to remember and carry forward. Given the heightened spotlight on racial injustice, now is the time to galvanize the country to eradicate all forms of discrimination that negatively impact the Black community, including hair discrimination. On National CROWN Day the Coalition is asking the Black community and its allies to share #PassTheCrown and to join the movement by signing the online petition at thecrownact.com, in addition to sending a letter or email to their state and federal legislators in states that have not yet passed The CROWN Act. 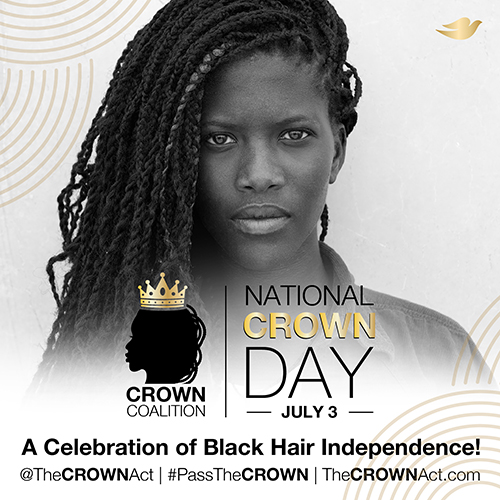 “Dove has always stood for beauty inclusion and rejects social injustice of any kind,” stated Esi Eggleston Bracey, Executive Vice President and Chief Operating Officer of North America Beauty and Personal Care at Unilever. “I am encouraged by how much we have accomplished in just eighteen months to bring an end to race-based hair discrimination. We are proud to have inspired a movement with significant impact, but we still have work to do. The CROWN Act has passed in 7 states and has been introduced in over 20 additional states and at the federal level. We know that hair discrimination is just one form of racial discrimination and we are determined to help bring about systemic change to eradicate racism in all its forms. Dove created the CROWN Fund and we are pledging $5M of ongoing support to drive change. We know funding is not enough, which is why we are taking action with our Coalition partners to advance legislative change.”

As the nation has turned its focus to dismantling systemic racism, the CROWN Coalition is expanding its work to fight more than race-based hair discrimination. The Coalition will be broadening its efforts by working to advance legislation and social change on more issues of bias and discrimination, as well as issues of public safety, voter suppression, and economic equity. The CROWN Coalition will now stand for Creating a Respectful and Open World with No Racism.

Background: The CROWN Act, which stands for “Create a Respectful and Open World for Natural Hair,” is a law that prohibits discrimination based on hairstyle and hair texture. First introduced in California in January 2019 by Senator Holly J. Mitchell (District 30) as Senate Bill 188, The CROWN Act expanded the definition of race in the Fair Employment and Housing Act (FEHA) and Education Code, to ensure protection against racebased hair discrimination in workplaces and in K-12 public and charter schools. The inaugural CROWN Act was signed into law by Governor Gavin Newsom in California on July 3, 2019 and went into effect January 1, 2020.

New York was the second state to introduce and pass The CROWN Act under the leadership of Assemblywoman Tremaine Wright (Bedford-Stuyvesant, Northern Crown Heights) and Senator Jamaal Bailey (Bronx, Westchester). Governor Andrew Cuomo signed The CROWN Act into law in the state of New York on July 12, 2019, deeming the legislation effective immediately. New Jersey was the third state to enact The CROWN Act in 2019 when Governor Phil Murphy signed The CROWN Act into law on December 19th, 2019, on the one-year anniversary of the wrestling match where New Jersey high school wrestler Andrew Johnson’s locs were forcibly cut off.

As of June 28, 2020, a total of seven (7) states have passed the CROWN Act to provide legal protections against race-based hair discrimination in workplaces and schools:

The CROWN Coalition is an alliance of organizations, including founding members Dove, National Urban League, Color Of Change and Western Center on Law and Poverty, that are dedicated to the advancement of anti-discrimination legislation across the United States. With the help of a diverse array of organizations in the social justice, business, legal, and education sectors, the CROWN Coalition has had tremendous success elevating the public narrative around this important issue and inspiring a movement to end hair bias and discrimination.