The History Behind the Iconic Swan Dress

The swan dress is an iconic dress resembling a white swan worn by the Icelandic artist Björk at the 73rd Academy Awards on March 25, 2001, and on the cover of her album Vespertine, photographed by Inez and Vinoodh. A Debenhams poll, published in The Daily Telegraph in 2008, voted it the ninth-most iconic red-carpet dress of all time. Valentino reimagined Björk’s swan dress at its Spring 2014 Couture fashion show at Paris Fashion Week, which received praise from fashion blogs and social media. 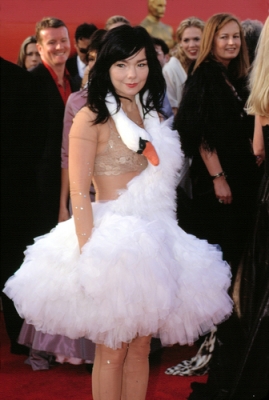 Designed by Macedonian designer Marjan Pejoski, the dress was designed like a swan, and at the ceremony, Björk mimicked laying an egg on the red carpet. Emanuel Levy described it as “A giant swan dress, a full-body stocking covered with a giant swan whose neck wrapped around her with its head and beak resting on her breasts.” She had two copies of the dress produced, given that she could not take it to the dry cleaners. One of the copies was auctioned off for the international aid agency Oxfam on eBay and sold for $9,500 in 2005. She later wore that dress on the cover of her 2001 record album Vespertine and variations of it many times on the Vespertine World Tour.

Ellen DeGeneres later emulated the dress at the 53rd Primetime Emmy Awards. Kevin James wore a version of it at the 2002 People’s Choice Awards. In 2007, the gown was proposed to take part in the year’s Oscar fashion show, highlighting the signature gowns from the red carpets of the Oscars from previous years. However, according to Oscar producer Laura Ziskin, Björk’s team refused to let the dress take part.

The dress was parodied in the 2004 comedy film White Chicks and the 2005 comedy film My Big Fat Independent Movie and an episode of The Fairly OddParents, Kim Possible and an episode of Hannah Montana, where the title character is seen wearing it to a gala event. The iconic dress was also parodied on an episode of Sonny with a Chance where a character wears the dress to an awards show. It was also parodied in one sketch from MADtv when the character named Mrs. Swan, portrayed by actress Alex Borstein goes on a date using the same dress as Björk. The dress also appears in Nelly Furtado’s “Bajo Otra Luz” video clips while Nelly dances wearing a copy of the dress.