Angelina Jolie wore a black dress on February 26, 2012, to the 84th Academy Awards at the Hollywood and Highland Center, where she presented the Academy Award for Best Original Screenplay. Jolie’s gown was styled by Jen Rade and created by Versace, a frequent dresser of Jolie on the red carpet. The strapless velvet piece gained praise from media publications and is considered one of the most memorable dresses in fashion.

Jolie attended the 2012 Academy Awards alongside then-fiancée Brad Pitt, who was nominated for the Best Actor accolade following his performance in Moneyball (2011). Jolie was regarded to be a trendsetter on the red carpet and was attributed to awards season trends of light and “icy” colors after her white Versace gown at the 2012 Golden Globes. She was interpreted to have dressed more conservatively since her directorial debut in the film In the Land of Blood and Honey (2011); after choosing more serious hues during the previous award shows in 2012, The Hollywood Reporter speculated Jolie choosing something bolder or colorful for the Oscars. Jolie originally had a “more complicated” dress in mind but preferred the black gown as she felt more comfortable and more like herself. The dress was custom-made by Versace, a frequent collaborator of Jolie’s, and was styled by Jen Rade. Jolie reportedly decided by labeling pieces of paper with the choices and picking them out of a hat with her family. 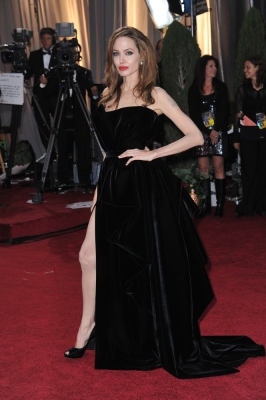 The dress is a strapless black deep velvet gown, with sculptural neckline ruffles, a bustle, two diamond clips, a wraparound belt around an asymmetrical bodice, and a dramatic thigh-high slit. Jolie paired the look with simple accessories, including a voluminous wave hairstyle, red lipstick, Neil Lane jewelry, a clutch by Jaime Mascaro, and peep-toe platform heels by Salvatore Ferragamo. Pitt wore a complementary black tuxedo by Tom Ford. Jolie and Pitt were one of the last arrivals on the red carpet preceding the ceremony, with Jolie being photographed posing with a hand on her hip and an “exaggerated leg pop”. During the Oscars, Jolie presented the Academy Award for Best Original Screenplay while wearing the gown. She posed similarly onstage, prompting winners Alexander Payne, Jim Rash, and Nat Faxon,

After the ceremony, Jolie’s dress gained traction across fashion blogs. The gown has been referred to as iconic by magazines Vogue and Marie Claire. Vogue wrote that Jolie “made fashion history that evening” and noted that a decade later, black gowns with leg slits were still in fashion. After Jolie’s appearance at the awards, Susan Cernek from Glamour wrote that the dress influenced subsequent fall trends for black skirts and ballgowns. Jolie was also credited with popularizing high slits in 2012 celebrity fashion.