The Queen of Kindergarten

The joys of our childhood often stem from Kindergarten.  There were no worries, it was the first time being in school, you made friends, played a lot and learned some valuable lessons.  It also takes a special person to devote a teaching career for Kindergarten students. April 21st is National Kindergarten Day and we want to spotlight a Maryland public schools Kindergarten teacher known as Sherrita Berry-Petus.

Sherrita has devoted her teaching career to working with the high energy age group of 5-6 year olds.  She began her studies at the acclaimed University of Maryland at College Park but not as an education major.  Sherrita first majored in Biology but later discovered the rewarding aspects of teaching and later changed majors.  She even went on to earn a Master’s Degree in Urban and Minority Education. Although she preferred to teach early childhood education she did not initially think of teaching Kindergarten.  However, Kindergarten was her first experience that she grew to love and currently can’t even imagine teaching another grade level.

Sherrita is motivated daily due to the fact that she can still incorporate song, dance and exploration into her classroom at the Kindergarten level.  Her classroom experience also led to her writing her first children’s book. One of her students was being teased about her hair. Sherrita used that experience to write a motivational message to the student and to young girls everywhere.  From there she discovered that only 10% of books made for children actually involved characters of color. She knew then, that she had to change this narrative. 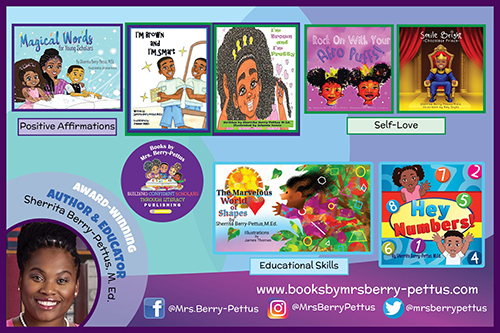 Today she writes all of her books with characters of color, although children of all orgins can enjoy them.  She prides herself on offering children’s books that allow kids to see positive images of diversity. Sherrita’s Kindergarten experience also provides for her keen use of developmental skills and academic awareness that are incorporated into her books.  Her published book titles are perfect for early readers and can be purchased on Amazon. For more information about Mrs. Berry-Pettus, like and check out her Facebook page. You can also follow Mrs.Berry-Pettus on Twitter and Instagram.

Writer, C. Scott, is a mother of one; author, social worker, early literacy coach and entrepreneur.