The world runs on numbers. From stocks to measurements and every type of system in the world that relies on numbers, we would be lost without them. For some, a career in numbers like accounting might seem daunting. For others, like Joel Sandoval, CPA, accounting was the answer to his search for a career. In a world of numbers, Joel Sandoval has taken accounting to the next level, bringing a whole new level of professionalism, community, and diversity to his team. Growing up, Joel did not know he would end up on the accounting path, let alone the entrepreneurial pathway.

For a little of Joel’s backstory, we revisit his childhood, growing up with parents involved in real estate. Having both parents and himself working in real estate, Joel’s family was greatly affected by the housing crash of 2008. Though he was working for a real estate firm at the time, Joel recognized that in the face of a financial crisis, real estate did not necessarily offer the stability he was looking for and valued in a future career. Luckily enough, Joel met a CPA at this time, who was able to share more about her career path. She resounded with his concerns on career stability and explained that even in a time of financial concern, her career remained stable and secure, and she did not have to worry about the state of the financial market to keep her job.

This prompted Joel to make a complete life change: he quit his job and enrolled at CSU Bakersfield, where he graduated Summa Cum Laude (highest honors) at the top of his class. Directly out of college, he was already receiving offers from big accounting firms directly in Bakersfield and Joel ended up taking his first accounting job at a firm specializing in tax returns. Joel recalled how this job really threw him in the deep end, with tax returns on his desk day in and day out. Joel explained that a typical workday started at 9 am and might not end until midnight at this job.

While Joel gained invaluable experience at this job, he felt that he was beginning to lose his own sense of work-life balance, and knew that it was time for him to tread deeper accounting waters. Joel was successful in finding a job at another accounting firm with a more work-life balance that allowed him to further his career while still furthering his personal life as well. Joel’s next step in building his accounting career came from his job working as an accounting manager for an oil and gas development-part manufacturer.

Working with an oil and gas company, Joel saw a whole other side of the accounting business. Rather than simply sitting behind a desk with accounting work, Joel was immersed in the business side of running one company rather than keeping track of hundreds of individual tax forms. Joel had to send financial statements for the company as well as track the commissions of all sales representatives, and this job gave Joel vital business experience that he would use later in life with his own CPA firm. Five and ½ years later, Joel runs his own business, using all the experience he gained along the way every day in his work. Now, Joel is invested in the betterment of not only his business but his employees as he engages in community-building and leadership training to empower those who work for him. 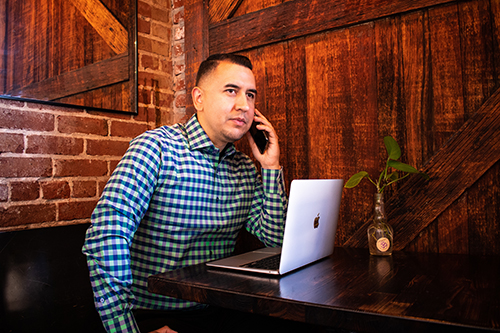