The leading ladies share how to be the most valuable player in love and life.

The beautiful women of VH1’s Basketball Wives started the week off right at Proabition DTLA for a private viewing party. It was the debut of the 10th season of the show which features either the wife, ex-wife, or girlfriend of an NBA superstar while following their daily lives. These women are star players in their own right who have created multi-million dollar enterprises.

Known for the ongoing saga of drama-filled parties, outrageous fights, and reality-based entertainment – this season the ladies are giving a more authentic perspective on their everyday lives highlighting their trials and tribulations while helping everyday people navigate through life.

This season’s cast members Jackie Christie, Shaunie O’Neal, Jennifer Williams, Brooke Bailey, Angel Brinks, Nia Dorsey, Brittish Williams, Brandi Maxwell, DJ Duffey, and Noria Dorsey promise a captivating season filled with laughter, drama, and everything in between. “It is epic, it is explosive, and it is everything that you think it’s not,” said Jennifer Williams about the 10th season.

“If you’ve been following us for all these years, you know I’m the staple on the show and I’m bringing it this season! I got all my girls back together and I made sure to bring them all in for my wedding. I’m gonna keep this thing going – the sisterhood is in full effect,” said Jackie Christie.

When asked what fans can expect this season, Brooke Bailey told SHEEN “This new season is explosive. We are bringing so much to the table, there’s a new twist of us really involving more of our personal lives all the way in dept. New friendships and you’re gonna see part 2 of drama,” while Angel Brinks added that “Our season is full of actual, real stories. Real-life stories and real relatable stories, it’s not like what they’ve probably seen in the past. A lot of comedy, a lot of drama – real stories.”

Aside from the mutual companionship, the women share a mutual challenge of protecting what they have and it takes a lot of work! From fending off groupies, dealing with jealousy, and trying to find stable ground in their often unstable world – the ladies all agree that you have to be mentally strong to be a basketball wife.

The Basketball Wives sat down with SHEEN and shared their top secrets to attracting the perfect mate and how women also can be the most valuable players in love and life. 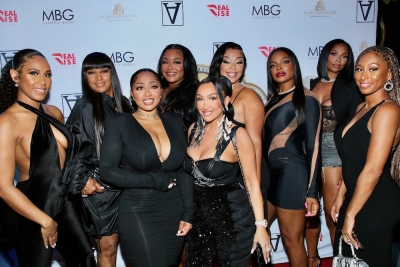 Definitely, I would have to say, the most valuable trait a woman can have is Communication and respect for herself. If you have those two things, a man is going to follow and they’re gonna want to be a part of that. In a relationship and how to sustain a relationship, cause I’ve been married for 27 years, is communication. He can’t read your mind and you cannot read his. So, speak to him, tell him what you’re feeling, and he’ll try to abide by that.

You gotta be strong! I’m talking about Hennessy straight strong, strong like cement. You really have to have touch skin like cement because there’s so much that you have to deal with – you’re in the limelight and you have to be able to hold your family structure together.

I’m gonna have to say Loyalty. Loyalty is big and for your own personal, you have to be very secure dealing with a ballplayer – that’s the biggest trait for yourself but I think in a relationship you gotta have loyalty.

I think it depends on the man because everybody is different, but from what I understand – I think the most valuable thing would be loyalty.

What are the top 3 secrets to attracting the perfect mate?

First of all, take care of yourself. You don’t have to be a size 2 like people say, just love yourself and be confident – a man loves confidence in a woman. Secondly, make sure you know what you want in life. Have your stuff together before you try to go and acquire a relationship. And thirdly, make sure you communicate, communication is the foundation of everything.

Honestly, I don’t know because there is a lot of bull_ out there. I’d just say, you know what? Take your time because sometimes people are not who they appear to be so really take your time.

I think you just need to bring your best self. I think you need to be transparent about who you are.

I really think that if they’re high value then they recognize high-value women. You have to have a strong foundation for yourself and a healthy mentality.

Honestly now, I think a lot of high-value men that make a lot of money these days are now interested in women that are focused on their value and how much money they’re making. And what exactly they’re doing and how career-driven they are. I think a lot of men are starting to feel that if they’re dating women that don’t have much going on that they’re with them for all the wrong reasons. So when you find a woman that has it going on, she has her own money then she’s probably really with you because she actually loves you. I think that’s probably the goal when a woman is focused on herself, her career, her family, and her values the most – I think that’s when a man will value you.