With July being Minority Mental Health Month, we couldn’t think of a better time to have the chance to sit down with therapist, author, speaker, and founder of MarleyAyo, Thea Monyee´. Her motivating and inspirational words left me thinking and wondering if her following and readers of her recent book, Blood & Bajareque felt as empowered as I did. In our intimate conversation, Monyee´ opened up to us about her book, her passion to heal Black/marginalized people, and much more.

Why would you say you are committed to creating healing opportunities for Black/marginalized bodies?

My background is in mental health, I worked in mental health since 2009. The populations that I worked with during that time and continue to work with are populations that are highly impacted by different interactions with systems. So, school systems, legal systems, justice systems, thing of that nature as well as issues with access to food and housing. Because this is how I was introduced to mental health and how I cut my teeth in it, I recognized the impact of the ecosystems a person is in and the systems within that ecosystem on their actual mental health. It became a conversation for me about one, how the current mental health model is very much centered on the individual is suffering from something, they send the individual here, the individual would be responsible for that, right? It doesn’t look at how the society acts and how it influences mental health and causes mental health issues. It also doesn’t say that people from different backgrounds or different experiences may need a different approach in what they view as health and what they view as positive reinforcement and what they view as healthy. The model is set up to standardize this mental health system that prioritizes getting people well enough to continue to go to school or continue to go to work so that the economy continues to function. I challenge us to instead look at it as a mirror. Our mental health system directly informs us whether or not our society is living, creating, and implementing a value system that centers wellness and well-being, or not. A great example would be suicide rates increasing. We can say that it has been at a consistent rate for some time. We know that there are certain populations that are higher in those numbers. Our response to that [currently] is that we’re in a pandemic, that’s what is expected. There is evidence that shows not every country that has been affected by the pandemic is struggling with high suicide rates. There is evidence to show how that society values people has a direct impact on whether or not people feel alone, depressed, or anxious. The goal to colonize mental health is to take a look at this idea that not the individual is suffering but the society is. That is a reflection of some of the value it holds.

What inspired the creation of MarleyAyo?

I think of MarleyAyo as a living organism. It’s constantly evolving and it’s this living, breathing, idea/space and people that we come together to put our efforts to decolonize to reverse and repair and heal the effects of colonization across the world into action. We do it in different ways. We have podcasts, I do media on different outlets to introduce new language, concepts, and ideas of wellness and mental health for Black and marginalized bodies. We have our education component, which is more of a learning component. We get a lot of people who have never heard of these terms or who are unlearning some of the more oppressive ways of viewing self-identity and wellness. Educators, doctors, therapists are learning how to dismantle these things so that they can do it in their own spaces and circles. It covers our learning lectures and materials. We have a consultation component that gives the opportunity to consult with different energies. I act as a consult with a health equity tax for policy groups. We get to help shape policy and consult with businesses or individuals that are creating policy and culture around these things. The last is land stewardship which is one we hope to bring in more fruition within the next couple of years. We want to create healing physical spaces, land that is centered on healing. We believe that getting people into natural spaces but also those natural spaces need some healing due to the effect of colonization. It creates a mutual, beneficial healing dynamic that is as powerful as therapy, if not more for people who come from cultures that are typically very tied to nature. Those are the different aspects to MarleyAyo. We love it, it’s a rollercoaster for us sometimes but we wouldn’t have it any other way. 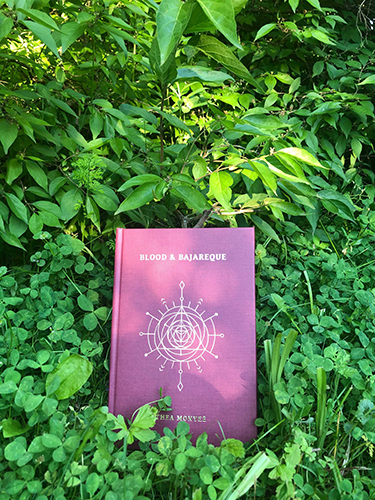 Call you tell us about your book, Blood & Bajareque?

Blood & Bajareque is one out of a second trip to Panama, where my father is from. It was the first time my daughter went out of the country and the first time in my father’s origin. They got to visit a lot of ancestorial spaces and learn about the stories of their great grandparents. When I came back, I immediately wrote down this list of things I never wanted to forget about what I had learned. It turned into a 30-day meditation with my ancestors. I would get up at 5am every day and listen and write. At the end, it led us to the completion of Blood & Bajareque. We could do a whole talk on just the connections of this book. For example, I was clear and adamant that I had to look a certain way, which was a challenge. I’m signed with a literary agency and an amazing agent named Jim McCarthy. They’re amazing. They’re so supportive. They have truly allowed me to have the voice that I want to have. It’s not always a voice that mainstream publishing is interested in hearing or prioritizing. With Blood & Bajareque was very clear that if we wanted it to be handled sacred, which I do think our ancestry and our ability to evolve the different fields that we’re in, the different art spaces that we occupy. Sometimes you have to be in places where you don’t have ask for permission every five minutes. Toni Morrison said in an interview with John Owen when she was being interviewed about winning a Noble Peace Prize that part of what made it so delicious for her was that she walked to the border, and she dragged the mainstream to where she was because she was constantly being asked over and over why her book didn’t center white people or have white characters. She said we would not ask a Russian author to center French characters (laughs). It just would never happen. But consistently in her interview, that was what was asked. Even after winning the Noble Peace Prize. She just constantly had to handle that question with so much grace but because she didn’t do that, she shifted the landscape of literature. She demanded that where she stood, be accepted and recognized as great. Had she moved from that space, it would not have done the work of evolving. Publishing still has a long way to go. With this book, we realized that we didn’t want to put the work through that process, we didn’t want to hand it over and have it gone through this sanitizing scrutiny, we wanted it to be real, bold, and raw. Because we did that, we were able to get this beautiful hardcover. Most places will not do hardcover (laughs). Most publishers don’t like doing it anymore because its expensive. It had to be cloth and hardcover, it’s just gorgeous. It’s a book for book lovers. People who like to hold their books, we touch it and feel like something is happening. It had to be for those people. We created these beautiful alter boxes that they would arrive in. Nothing is just one thing; everything is always mini things. Our thinking was if we handed people something sacred, it has to come in something that looks sacred, and they have to see themselves as sacred in order to open it and access it. The whole thing was this training round for people to hold themselves as sacred and therefore hold other people, their work, and their being-ness as sacred. It was such a detailed, intuitive intentional process. It took us months! (Laughs). Now we are doing a virtual book tour called Hold Us Sacred, where we are having these real time conversations with people that I love and deeply respect. We are unlocking and unpacking the sacredness of what makes it so sacred. My mom said that the book takes things that my grandmother would do that seemed really simple and turned it into ritual. English teachers would cringe (laughs). It doesn’t follow any norms. I do know that after all, I realized that the cover had to look a certain way because when I was young, my great grandmother gave me a hymnal before she passed away. She had taken the time to mark her favorite songs with these gold stars. I thought I lost it but in the process of getting the book out, my mom realized there was a box of my stuff in the garage. Sure enough, I pulled out the hymnal and I hold it side by side with the book and it all made sense. This book is a hymnal. Hymnals are these testimonies from the real ground about how we feel, how we’re responding to the world around us including the spiritual world. Its musical and rhythmic, that’s essentially what it feels like. We’re super excited about it and sharing it with people in such an intimate way. We have a thing now called Your Book Is Your Ticket. If you have the book, you’re automatically invited to these ongoing conversations about how to access the book and use it as a tool for your own personal development and liberation. That kicked off just yesterday [Friday, July 23rd, 2021].

I’m getting my cohort all geared up and ready to go to war (laughs) with the mental health system. Kidding, not really kidding but really just getting them ready and armed for being more confident to go out there and have these conversations. We’re planning to go into season four of Shaping The Shift, which is the podcast. We’re looking at land ownership opportunities for the company as we really keep following our vision of healing the land and with the land. The last thing we’re doing is working with EbonyJanice Moore and Black Girl Mixtape on a project called The People Could Fly – which is a reimagining of the rebellion at Igbo Landing. It’s a story about Igbo people coming from Nigeria, who overthrew their enslavers. The story is told with a mass suicide, where they chose to walk back into the water and drown after seeing who was waiting for them at the shore, where the boat arrived. The overthrow took place at sea. The account from the other Islay people is that they did not drown but that they flew and flew home. That is the story and version of the story that we are sitting with the question of what happened on that ship that activated people to a point of supernatural ability. It unpacks all that it implies about our liberation. To purchase your copy of Blood & Bajareque, click here.

All images by Sheldon Botler Photography