TÖME is a whole vibe, and she’s here to spread that R&B-afropop fusion from Canada to the rest of the world. Having only made music for 3 years, the rising star explodes on the scene with her standout voice, unique sound, and undeniable beauty — seeing no boundaries when it comes to her art and perfecting her craft.

Clocking in over 5 million streams under her name, TÖME already has what most artists wish they could achieve in a lifetime: a JUNO Award. Serving as the equivalent to a Grammy in Canada, TÖME took home the trophy for Best Reggae Recording, for her record “I Pray” featuring Sean Kingston.

Fast forward to 2022, the French-Canadian Nigerian recording artist returns with her newest body of work titled LÖV, which stands for Love Over Vanity. Serving as her third studio album, LÖV clocks in at 10 tracks, exploring the themes of love, hard work, passion, resilience, focus, patience, and sacrifice.

SHEEN caught up with TÖME via Zoom, who said the weather was warming up in Toronto where she resides. Read below as we discuss her sound, roots in Canada, the turning point in her music career, opening for Mr. Eazi, how she got her name, the new project and its meaning, the butterflies on the cover art, favorite songs, the “Wait” visual, studio essentials, upcoming shows, goals, and more! 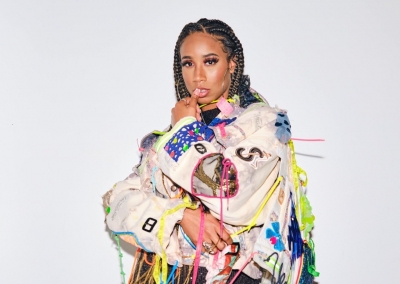 How would you describe your sound?

The primary focus for me is always emphasizing the diversity in my sound. I say Afro-fusion because of where we’re at right now in music and really emphasizing the Afrocentric, Afrobeat culture within the sounds and fusions that I grew up on, which is soul, R&B, and Hip Hop. Really fusing the two together, so Afro-fusion is really where it’s at for now.

You were born in Montreal, but raised in Toronto your whole life. What was it like growing up there?

Very multicultural, let me tell you that much.

If you’re raised around different cultures, it’s almost inevitable you’ll start to soak in a little bit of different cultures that you surround yourself with and are raised around. For me, I went to a Francophone school. I’m French Canadian, so I was in a Francophone school my whole life. It’s not French immersion, it’s full French here. The cultures that I grew up around were literally Arabic, French Africans, Europeans & Caribbeans who were in my neighborhood . It was already such a mix of culture, and I was close to so many of them. So really my upbringing was very multicultural and diverse. It really does embody who I am and how I also make my music beautiful.

When did you fall in love with music?

[flutters lips] At a very young age. I was so young. I just fell in love with entertainment as a whole. I fell in love with music and acting, the two at the same time. By 8 years old, I was already writing poems or lyrics out in my notebook and everything. I had no beat, but I started writing. By the age of 10, I literally started composing on my guitar. I finally got my classic guitar. After begging my parents, I finally got one. I started composing music from there, and the rest of history really. [laughs]

When did you realize you could do it for a living? Was there a turning point?

It was 2019, and my father was my manager. He’s also been heavily involved with show production for a long time. He was hosting Wizkid in Toronto in 2019. At that point, I had the opportunity to perform. He said “do you want to perform?” I’m like “yeah.” After that show, there was opportunities to do the two other Canadian shows. That was in Montreal and Ottawa. From there, we started getting more asks to come out and open. More people started offering me the opportunity to open and perform, so I started taking any opportunity I got, really and truly. It was November of 2019. We now have the opportunity to tour globally in Europe with Mr. Eazi.

What was the inspiration behind your name?

TÖME is actually my middle name. My middle name is Oluatomi, which means God is enough for me. TÖMEitself means enough, so I am TÖME, I am enough. That’s really the message behind it. I wanted to be a little creative and change the “i” to an “e,” because initially it’s “tomi.” That’s the actual way to spell it. But I thought “nah, let me be fun with it. I just want to be fun.” I wrote TÖME so I could be more creative lyrically.

You just released your album LÖV, is it pronounced love?

LÖV, love over vanity. I call it love too, so it’s fair. [laughs] I’m ecstatic about it. It’s been doing great. It’s probably been my best release so far. I’m super happy.

Why’d you call it Love Over Vanity?

There was no necessary “okay, I’m going to call it Love Over Vanity, and then make up the tracklist.” I literally had a bunch of music. I started looking at it like I want bangers upon bangers. What do I have to show?I put up the list together. I started really looking at: “okay sonically, this makes sense. This makes sense.” By the time that I created the order, I now had 7 songs that were basically about love. [laughs] And 3 songs that were more vain, more self-indulgent and confident.

I was talking to my friend, big shout out to my homeboy and great producer out here called Godflow. I was just telling him, “I don’t want to emphasize love, I want to emphasize the project as an all. But obviously, there’s a big highlight theme of love. So how can I incorporate and make it cool?.” He’s like “give me a few minutes.” He comes back to me end of day like “LOV: Love Over Vanity!” I’m like ”oh my God, that’s perfect” , And that was it.

What do the butterflies represent on the cover art?

To me, it’s a lovely thing because I feel like that’s exactly the stage I’m at in my career right now. If you know me from the beginning of my music to now, you literally see the journey of growth. You see the new beginnings, you see the new potentials to come. Right now, I’m in that stage of the butterfly and I really wanted to represent that.

What songs mean the most to you and why?

Oof, that’s a hard one for me to answer. “Good Life” means a lot to me because it’s a song of manifestation. First of all, it’s just a dope song #1. Then #2. I love the message behind it. “I can’t wait till I get my money right.” It’s this exciting feeling of I know I’m going to get there. I know I’m already there, and I can’t wait for it to be fulfilled.

What inspired the “Wait” music video?

That was the first single we released from the project, in December of 2021. We knew that amapiano was really on the wave right now, and we got a lot of good feedback from the song. We thought to ourselves: “okay with the album, you know what? Let’s drop the music video.” We wanted it to be fun for the most part. We wanted to give people energy, fun, excitement throughout the song, and that was really it. We didn’t want to overthink it. We didn’t want to over saturate it with crazy props or whatever the case may be. We just wanted fun, attitude and gritty.  That’s what we aimed for and that’s what we got.

How’d it feel winning your first JUNO award? It was for “I Pray” featuring Sean Kingston, that’s incredible.

Man, thank you. The song itself was inspired by 2020. That whole heat of the year going into isolation in April of 2020. The Racial injustice, social injustice brewing up to the extreme. There was the #EndSars movement in Nigeria. Generally speaking, I had a heavy heart. I think everyone did at that time. I’m a believer in God. I believe God.

It was this moment where he played the beat for me, and this was on Instagram Live. Just to show you, me and the producer on IG Live and we’re making music. We’re like “let’s be creative, all these virtual realms since we’re all isolated.” We’re on IG Live and then he plays the beat, and I just connected with it right away. I thought “this is super reggae, but I’m connecting with it.” I thought initially about “Man Down” by Rihanna. That’s why the first line “gun man wanna knock me down” comes about. ”I’m on my knees and I pray, crying Lord, have mercy on me today.” Just to keep faith through these times, because it was crazy times.

Next thing you know, I made a song about God, and he blessed me right back with a Juno. Having Sean Kingston on it was crazy too. Big shout out to a team member that I used to work with, Jones. He knew people from his team because once again, Covid. No way for us to connect directly, but it was all virtual. Sent him the song, I guess he really felt the message of it. Sent me back a verse within two days.

What is it you want fans to get from your story?

Just to never settle. Never settle to be less or more than who you are, that’s #1. Realistically, don’t ever think that you’re not worth it, because I definitely felt like that at one point in my life. I literally almost put music down and away forever. I don’t know why I did that because the amount of people I’ve impacted and the amount of people I inspire every day is incredible to just realize. Don’t settle and don’t think that you have to conform to anything. Just be you. You are enough. That’s it.

3 things you need in the studio at all times?

That’s a good one. Definitely a candle or incense, I like that. I like that a lot. I guess that’s in my own studio. In my own studio, I have my own little routine. When I go into other people’s studio food, a little bit of food. I need food at one point because I know I’ll go hours without eating, so a little snack or something.

Any goals for yourself at this point in your career?

At this point in my career, I definitely — shoot girl, go viral. [laughs] That’s a big one for sure. Be able to go Viral by God’s grace by the summer or the end of the year, really be able to go on a global tour of my own shows. Really start to be able to push that market internationally. Whether it be big or small crowds, I don’t care. Just be able to actually start going on a global tour of my own music for my own show. That’s definitely my goals for this year.

Make sure you check out my music, listen to my latest album. Love Over Vanity, it’s an amazing project. You’ll love it, no matter what music you listen to.