Violinist, Joy Black on Her Unique Style of Incorporating R&B & Hip-Hop In Her Music

We’ve heard before that a simple dream can be an inspiration. Violinist, Joy Black exemplifies that to the fullest. As a 13-year-old girl being bullied, Black one night dreamt taking the stage and performing in front of thousands of people. When she first picked up a violin, the rest was history. I recently had the pleasure of sitting down with Black for an exclusive interview to discuss her unique style in the violin, working with Mulatto, and much more.

Walk us through the process of you first falling in love with the violin.

I was in nineth grade. I was bullied throughout my entire life, so it was hard for me to do anything. I actually had a dream that I was 13 and on stage in front of thousands of people. The dream felt so real. It gave me a sense of hope while I was in school depressed. I was skinny and awkward. It felt like it was some place I needed to be. When I first held the violin, it was meant to be. Of course, at first it didn’t sound great. Over time, I got better. As I got older, the bullying continued. I started doing my solo career as a violinist when I had enough money for nice clothes and school. I started to street perform. I would make money to buy clothes. People would come up to me and tell me that I should be performing at big events. At the time, I really wasn’t thinking about that. I really just wanted to get clothes for school. When I did have the money, girls became jealous, and I realized that I should just do this for me and not try to impress anyone. I followed my dream and began posting videos on social media. That helped me get a lot of gigs and helped grow my career. 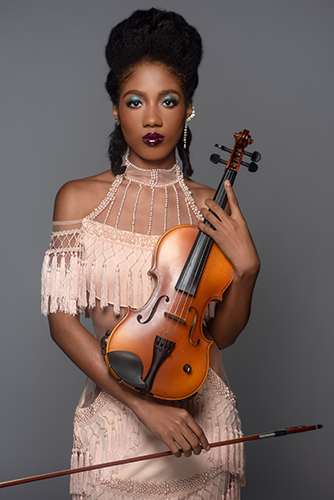 We know you worked with Latto (formerly “Mulatto”), for her song “Youngest and Richest.” What was that experience like?

Funny thing is, when I was in middle school, I first saw Mulatto perform at a pep rally that my school held. That’s when I first found out about her. I looked her up on YouTube and watched her music videos. I wouldn’t know in that time that I would be working with her now. That was my first major artist collaboration. It was a great experience. We filmed in the country part of Georgia. It was so fun, she was really nice.

How would you describe your style, incorporating R&B and hip-hop?

I started off playing classical music and then I began to incorporate hip-hop. I used to want to be a rapper. I kept with the violin and thought that I could perform music with a hip-hop beat. I would practice playing my favorite songs and it sounded good and the audience would love it. In the process, I would sit and listen to the beat or the track for a couple of hours before I began to play. I vibe with the music and create from there. Any inspiration that flows is the creation process from there.

Since coming out of the pandemic, I am currently building up having my own shows. For a lot of people, I am the first violinist that they have seen play hip-hop. It’s something that I want to showcase to the world. We can be more than just dancers, singers, and rappers. We can play instruments as well. That’s something I want to bring out to the community in a bigger way. I want to incorporate dancers, aerialists, and performers. I want to take things to the next level. 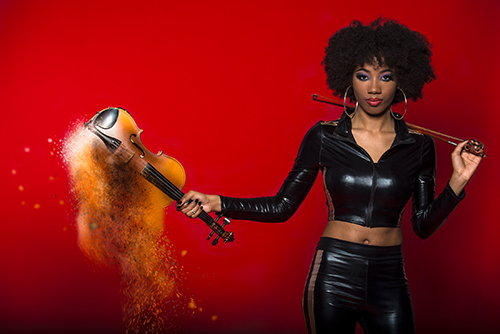 All images by Band P Studio