We know and love actor, Siddiq Saunderson from Hulu’s hit series, Wu-Tang: An American Saga. In the series, Saunderson portrays Dennis Coles – a talented 19-year-old kid musician who grows into the artist Ghostface Killah. The new season of the show has already got us on our toes, so naturally we had to sit down with the star for an exclusive interview to discuss all the details. In our conversation, Saunderson opened up about filming season two during the ongoing pandemic, his character, and much more!

Tell us about your role as Dennis ‘D-Love’ Coles on Wu-Tang: An American Saga.

I play Dennis ‘D-Love’ Coles aka Ghostface Killah on Wu-Tang: An American Saga. The character is a young man from Staten Island. He has a lot on his plate and a lot of people that relay on him to help them, whether it’s taking care of his two brothers who both have muscular dystrophy or his mom who struggles with alcoholism. There is also Bobby who he helps guide and help stay on track. He hustles in the game but has a lot of responsibilities. He’s young and has to mature quickly, given his life circumstances. That turns into some of the stories and verses that allow him to become one of the greatest, most iconic musicians of all time.

What can we expect to see this season on the show?

This season, you see Dennis turning into Ghostface Killah. You start to see the beginning of who that is and the development of the character. In the first season, you dealt with a lot more of the groundwork and foundation of the story. This season, you see the characters, specifically my character deal with different things such as fatherhood, priorities, risks, and that eventually leads him to become more confident and really approach and attack the rap game. He tries to find his voice.

Did you happen to film during the pandemic? If so, how was that experience?

We filmed all of season two during the pandemic, as we still are in the pandemic. It definetly was different. I was just excited to have the opportunity to do what I love and be back on set with the Wu family to create something. It was a big blessing for me but it did come with a lot of new protocols. I like to joke that we had the COVID police (laughs), but that’s kind of what they were. They ensured everyone had their mask on and made sure people were socially distanced as much as possible. We were tested three or four times a week, depending on the shooting schedule. There were a lot of things put into place to keep us safe, and I’m appreciative. It may have become difficult at times but I tried to remember the blessing in this. I have to sacrifice my nose with the q-tip for testing. As uncomfortable as it is, I’m just happy to be here and back at work.

It’s had its challenges. With that being said, I think that it does have a lot of benefits. I believe that COVID-19 caused a collective pause in society. Everyone responded the way that they did, I know that I responded in particular to the ability to stop and think about what is important in my life and how I want to represent myself. At the end of the day, when the world shut down, a lot of people turned to Netflix, HBO, and Hulu to keep them entertained and keep their spirits up. It was a way for us to escape what we’ve been going through. I did photoshoots recently and collaborated with artists I have admired. During the pandemic, I started a book club as well. As unsure as everyone was, I just felt like it was time to figure out the things in our life. For me, I got to really dig into my creative life. Art is powerful and will stand through the test of time.

Currently, I’ve been doing press and promoting for season two. That took up a lot of my time, just getting the word out there and get our fans excited. That’s what I’m working on and of course, the hustle and bustle of being a working actor and auditioning. I have a movie that I was in called R#J. It’s a Romeo and Juliet story for Gen-Z and millennials. It’s a movie for everyone but it was at Sundance this year. I’m excited to see where that movie will land and live. That will be coming out shortly. I have some other projects that I am working on producing. Again, throughout COVID, I got a chance to tap into that space and desire to create my own work and tell my own stories. 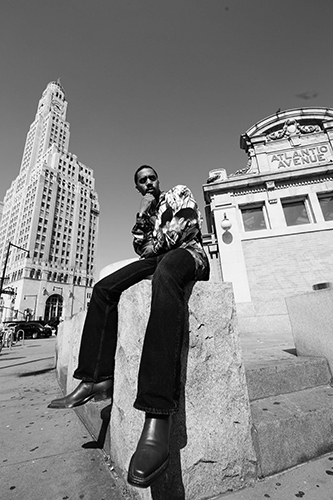 Processed with VSCO with b4 preset

All images by Lihi Brosh