Okay, most of you wont admit it but believe it or not, people really enjoying watching other people eat food. I swear, I thought it was the oddest thing until I came across a Mukbang video on YouTube. Maybe it was the influencer herself that sold me, regardless, I became hooked. Who was the influencer that changed my entire outlook? It was none other than the Mukbang queen herself, Bethany Gaskin, popularly known as Bloveslife. If you haven’t heard of her, be sure to tune into this exclusive interview now to familiarize yourself with the woman that people just can’t quit talking about!

How did the idea come about for your YouTube channel?

You know what, it came about three years ago. I’ve always wanted to do YouTube but I never knew what type of content I wanted to get into. I started in January 2017 and I did cooking videos. As I did those videos, I tried to throw in Mukbangs. Mukbangs are food that you eat in front of an audience while conversating. I did a seafood video in honor of Jasper Daze and I talked about the past memories of him and people went crazy with that video! I noticed that people were really like the Mukbang videos so I started gravitating towards those videos because they were easier to edit and a lot of people enjoyed them.

Did you think it would take off the way it did?

It definitely surprised me. I’m still pinching myself, I don’t even know how I got here (laughs). I never thought it would take me this far. It started off as a hobby and I did it for fun. It just blew up so quickly. After four months of doing it, I quit my job and began doing it full-time.

What has this experience been like for you overall?

It has been nothing short of amazing. It has changed the dynamic of my family life, our lives have changed completely. My whole family does YouTube. My husband is our manager, both of my sons create content on YouTube, and I have a brother that has been added to the list. It has changed a lot of things about me. If I had to describe it in one word, I would say it’s an explosion. It’s like a bomb set off in our lives but it’s amazing.

What’s something most of your subscribers don’t know about you?

I think they pretty much know everything about me, I’m an open book. I’m that type of chick that is on a video and I’m everyone’s auntie, mom, best friend, whatever they want me to be that day, I’m that person. I’m very open about everything that I do. I don’t know… there isn’t anything that I hide from my subscribers. I’m goofy, I tell it like it is, I don’t sugar coat anything, what you see is what you get (laughs).

Well, I’m doing a lot of things right now. I’m in the process of writing a book on how I became a millionaire doing YouTube videos, I’m working on products to sell on Amazon, and I want to get into other things such as traveling. My team and I are thinking about doing a Bloveslife Tour so I can do a meet and greet so I can eat with my subscribers! 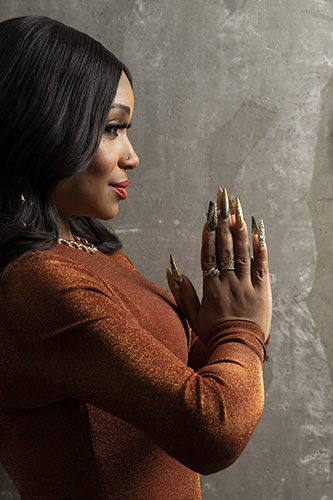 All images by Ian Spanier