From the NFL to CEO: Learn How Gary Brackett Continues to Win

He is the epitome of strength, perseverance and has an honorable legacy of excellence. As a former linebacker for the Indianapolis Colts of the National Football League, Gary Lawrence Brackett, has been impacted by the inevitable highs and lows of life, but always remained at the top of his game on and off the field. Although Brackett was born and raised in a small town, he had big dreams of being successful. It was his self-motivation and passion to see himself excel, that were the driving forces that helped turn his dreams into reality. To shed some light on his amazing NFL career, Brackett had incredible energy and gave all he had on the field. As a team player with a big heart, he understood the mission and knew how to accomplish it with flair. In 2005, he had 127 tackles, three interceptions, and a sack. In 2006, he was named defensive captain of the Colts and had 120 tackles. He started for the Colts in their Super Bowl XLI win over the Chicago Bears. In 2007 Brackett recorded 116 tackles and four interceptions. He recorded 99 tackles in both 2008 and 2009. He started for the Colts in their Super Bowl XLIV loss to the New Orleans Saints. As impressive as his time in the NFL was, Brackett was no stranger to pain and loss. I had a chance to sit down with him and discuss some of his childhood, his football career and his current success as a CEO of Brackett Restaurant Group, which includes over ten Stacked Pickle casual dining restaurants.

You are now a very successful CEO. What was the biggest lesson that football taught you that you can still relate to today?

The biggest lesson has been perseverance. In football everything is not going to be perfect, you’re going to be knocked down, there is a lot of resistance, the same thing is true in life. It’s important to keep pushing forward and that’s something that sticks with me today. It’s not always easy being a CEO of 400 employees, growing a company. There are always challenges but knowing that I am going to persevere keeps me going. I’m always going to be thinking a few steps ahead and finding out how to get through it. 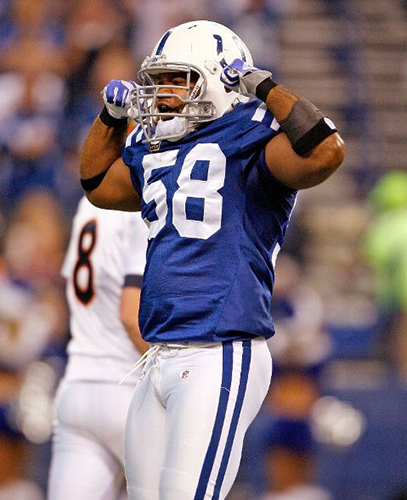 What is one of the funniest things that happened on the football field or the locker room that still stands out in your mind?

This guy, in particular, was upset because he wasn’t starting. He was playing special teams, and someone got injured. During the second play of the game, he comes in and his eyes are wide open like, man, what the hell did I get myself into! He got a touch-down scored on him and on the side-line, he was telling everybody that he wasn’t ready and how they caught him off guard.  I was like man, with all that trash you were talking, you should stay ready! So, we would always joke with him after that every time he went out on the field and we would make sure we asked him if he was really ready.

Let’s talk about your restaurants. What sparked your interest in starting up the amazing sports bar chain of restaurants called the, Stacked Pickle, which has been voted Indy’s #1 Neighborhood Sports Bar and Grill, by multiple news outlets and publications?

I was always passionate about the restaurant industry. My first job was a dish-boy and I just learned so many valuable lessons. My mother passed away, but she was an ordained reverend, and one of the things she instilled in me as a child was, the greatest among us will serve. It is an exciting thing to be part of. It’s the ultimate team sport, everyone has a common goal. 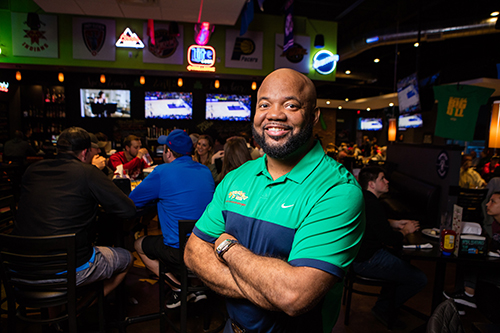 Speaking along the lines of food, what’s a food you couldn’t stand as a kid but now can’t live without?

I love this question! My father was a chef, and he would love to cook. He would make a lot of soul food at our house, like fried chicken, collard greens and things like that. There used to be an old commercial that talked about a kid named Mikey and how you could give it to Mikey, and he’d eat anything. I was like Mikey! There’s really not anything that I won’t eat. We were working with a limited budget too. Each day was designated for something like chicken one night, breakfast for dinner, stuff like that.

With anything in life, there will be ups and downs, life is reminiscent of the ebb and flow of the ocean—it gives us a little and it takes some away. I know you understand that all too well, due to the 17-month span in 2003, in which you lost your mother, father, and brother. That had to be incredibly painful for you. How did that experience shape who you are today and how did you get through it all?

Wow, it was just a very rough period, first, my father passed away, then my mother, then my brother. I stayed in the church growing up, but at that point in life, I really questioned God. The moment that I lost my brother, I saw the poem Footprints on the wall. That stood out to me. It was at that moment that I stopped questioning and instead, asked myself what I needed to learn from it. The lesson from that was to cherish every single day. There will be a time when we won’t be here, and it would be unfortunate to not take advantage of everything that’s at your disposal. There was a time when I wanted to quit, but I realized the way that you honor the dead is how you live your own life. 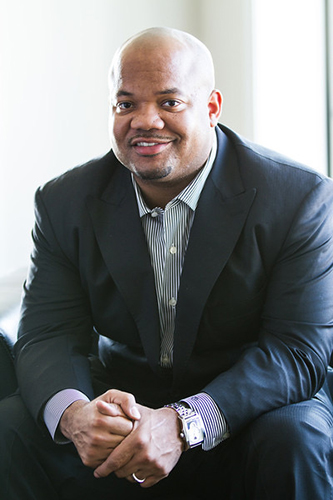 In 2011, you published your book “Winning: From Walk-On to Captain, In Football and Life,” which is a memoir about your life. Why was it important at that particular time to bring that book out?

In 2007 when we won the Superbowl would seem like it was the right time, I had publishers hit me up, but I wasn’t ready to share my story. I took some time for healing and taking care of myself. Only so many guys make it, and I had to go from being a free agent to actually being a captain of a Superbowl team playing at a high-level. I actually have a record for the most solo tackles for any player in the Superbowl. That was what my book was about, and I still speak publicly about my testimony. 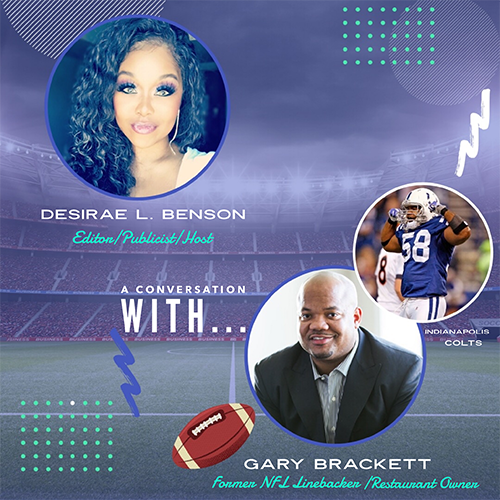 Gary had a lot more to share! To listen to the FULL audio and video version of this interview, click here.

Desirae L. Benson is a west-coast based editor, entertainment media host, public relations specialist, content editor, and the creator of her own show, “Moved by The Music” where she interviews mainstream and indie artists who are doing great things in the music industry. She also has three other segments of her show which include, “The Person of Prominence,” “The Actor’s Spotlight,” and “Comedians Corner.” To learn more, you can connect with her on Facebook and Instagram: @DesiraeBBB For media inquiries or to pitch a story, contact her at, DesiraeBBB@gmail.com

All images courtesy of Gary Brackett