The Power of Faith, Fashion and Music with Grammy-Award Winning Singer and Songwriter Dante Bowe

It is no exaggeration to say that Grammy® award-winning, multi-platinum selling singer, and songwriter, Dante Bowe has gotten our full attention. His style is a unique blend of soul, gospel, and R&B that has captivated audiences all around the world. Bowe, who is from Rockingham, North Carolina, but currently based in Nashville, Tennessee, gives everything he has when it comes to his love of music and how it makes him feel.

Earlier this year, Bowe added the title of Grammy® winner to his stellar music career for the work he did on Elevation Worship and Maverick City Music’s record, Old Church Basement. Bowe said that winning his first Grammy® felt like a full circle moment. I could feel Bowe’s pride from this accomplishment, but I could also feel his humbleness as he described his feelings of gratitude to be able to achieve this kind of recognition for his diligence and work. He explained, “As a young artist, that’s something that you always hope for in the future. With your music, you want it to win the ultimate reward. I thought it would take forever, so it was really you know, crazy. I am grateful that I got to experience that so early in my career during my first album.”

Not only is Bowe known for making memorable music, but people are also intrigued by his fashion sense. He has a look that commands attention by boldly standing out from the crowd. It is his confidence in how he owns his style that makes a powerful statement. I was curious to know what influenced his clothing choices and how he puts it all together. His answer was interesting, and I could sense a smile from the other end of the line when he reflected on growing up with parents who were into fashion. “Growing up in the urban community, my father was all into fashion. He always had his Tims on, white Air Force Ones, and a white T-shirt. My mom was also into fashion. It’s just our culture, so as I became an artist, you know, I was able to afford some of the things that I always loved as a kid. I found a new passion for it. My favorite designer is Dolce and Gabbana now because they’ve been working with me a lot. I’m actually going to be wearing them for my upcoming shoot, and they dressed me for the Grammy’s too.” 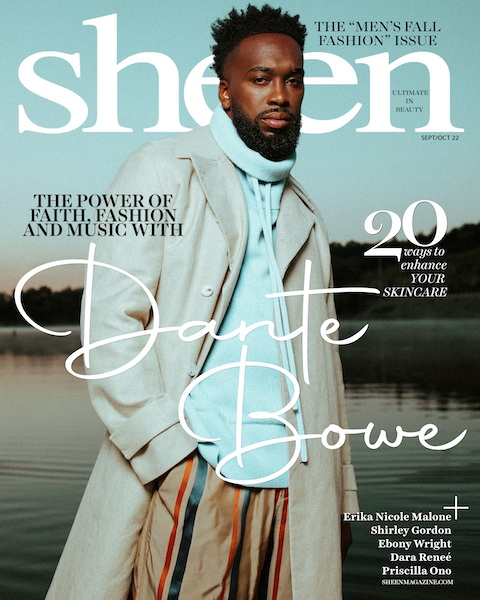 Many of Bowe’s experiences and influences growing up are still with him today. This explains his passionate, focused nature and his internal need to convey messages of faith and love through his music. Bowe also discussed how his family served as an inspiration for his involvement with music. “I was always intrigued by music and singing. I have a cousin who could really sing, and I was always inspired to do it. However, being raised in a small town, no one ever makes it by doing music. So, it’s like you tell your friends and family you want to do music, and they’re like, ‘Oh cool, yeah ok,’ but I think what sparked it in me was my family members and how they sang their harmonies. My grandmother always thought I could do it. So, I would say between her and my uncles, I just decided—okay, I’ll do music. I always think I got here by accident. I just did what I loved,and tried to write the best I could write and sing to the best of my ability. People started paying attention and liking it, so I’m here.”

With every artist being different, I was interested in knowing what kinds of things Bowe did to prepare himself for a performance. “I just try to talk to God throughout the day, you know, having constant communication, just like if you were in a marriage to keep the relationship going. So, the communication is not just when it’s convenient, but whenever – [during] car rides, washing the dishes, or cleaning up the house. Just bringing up Jesus and my faith is what I try to do.”

Bowe has a very strong faith and clearly values his time in prayer and meditation. Thinking about this and how he travels a lot for shows, I wanted to know how he decompresses and what he does to personally give back to himself being that he keeps a very rigorous rehearsal and travel schedule. Being the retrospective person he is, his answer was not a surprise.

“Sometimes if the weather’s nice, I go outside, I have this spot. At my old house, I had a lake that we used to walk around every single day during the pandemic. Now in my house, it’s the outside patio. I go outside, breathe, and evaluate my life, what I’m doing and where I’m going… I feel like I’m in a good place.”

In Bowe’s video for his hit single, “Joyful,” there’s a scene of him riding his bike down the street smiling. At one point Dante waves to an unassuming man and the man displays a look of confusion because of Bowe and his random gesture of kindness. The scene is the perfect example of how some people react to kindness. I asked Bowe to describe a time when someone displayed kindness towards him. I love what he shared. “There is a moment that stands out to me, and it may sound silly. I was on tour, and I had on my Jordan 1’s, they’re called Mochas. Me and my friends all got them, that’s how trendy they are. I was running to get in the golf cart to go to the place where we were going to eat, and I literally jumped in mud up to my knees. The area was covered in grass, so I didn’t know. I get out and all these supporters are recording me, putting me on Tik Tok or whatever, and I’m like ‘Oh no!’ So, I was upset, but was like whatever and just thought I’ll throw them away later. When I got back from eating, my best friend said, ‘Your shoes look brand new.’ He took it upon himself to clean them with his hands without me knowing. At first the shoes were covered in so much mud you wouldn’t have been able to tell what kind they were. He personally cleaned them without me asking, so I thought that was very special.”

Bowe is gearing up for his eight-city tour starting in August, called “Miracle Nights.” He shared that this is going to be special as he is working with two of his close friends. “I’m going on tour with Aaron Moses and Aadhan King. Aaron is one of my best friends. He is part of Maverick City Music, and we’ve written a bunch of songs together. We got our first number one together with Tasha Cobbs. It will be very special. Ayden King is from Hillsong Young and Free which is legendary in our genre. We are all young men and I thought it would be cool to do something where three guys from three different cultures, and come together to create something beautiful in one moment.”

For more information on Dante Bowe: