The OWN network welcomes Craig Wright’s, “Greenleaf” creator, new drama series, “Delilah” starring Maahra Hill (Black-ish) in the title role. Delilah Connolly (Hill) is a headstrong attorney who chose to leave a successful but demanding practice to raise her two children. The new series, based in Charlotte, North Carolina, follows Delilah as she defends the disenfranchised whilst balancing single parenthood and relationships. Jill Marie Jones(Girlfriends) plays Tamara Grayson, an attorney and Delilah’s best friend. As the defender of the wealthy and powerful, their friendship is tested when Delilah faces her in court. Sheen Magazine had the opportunity to interview these two amazingly talented actresses to find out what we can expect from their new series and their characters.

I am so happy to see you on a series again. You have such a strong, positive presence on screen where you exude confidence, how do you achieve that?

Jill Marie Jones: Thank you. I’m really excited about our show. On screen, my confidence comes from preparation. Knowing my character inside and out. But I believe true confidence comes from knowing your worth and the understanding that you truly belong, wherever you stand and breathe. I am human. I understand that I’m imperfect. I accept my flaws, and that’s really powerful… on screen and in regular ole life.

Congratulations on “Delilah”! You play your role so effortlessly with such grace and strength. How did you approach this role? Did you base this role off of any real-life experiences?

Maarha Hill: Thank you! I approached the role by pulling from the similarities we share. I understand Delilah and would definitely be friends with her. We share similar values and life experiences. I put motherhood first, had a co-parenting situation that evolved from heartbreak. I put others first at my expense for a meaningful cause and am driven in my career. We differ with the relationship she has with her father. Hers is strained, mine is not.

We are going to get to know Delilah Connolly this season, what can we expect?

Maarha Hill: You can expect to see a flawed human being who is doing her best to balance the most meaningful parts of her life and her moral compass. She juggles it all with grace but not always with ease.

As you know, our new VP, Kamala Harris, was a former district attorney. How do you think Delilah would do up against her in the courtroom?

Maarha Hill: Delilah is great at what she does, so I think our VP would get a run for her money! Haha! VP Kamala Harris is a brilliant woman and Delilah has a great team in her office with Harper and Demetria. Their “discovery” game is very tight. I’m sure it would be difficult for a judge or jury to come to their conclusion.

Delilah decides to redirect her career for the sake of her children but is she were a male, she wouldn’t have to make the same sacrifices. Why do you think this is still such a stigma for women?

Maarha Hill: It takes a lot of time and consistent effort to change minds, especially when groupthink is involved. Men are seen as the providers and women are the nurturers. I’m not sure those archetypes will change anytime soon. I do believe it’s time to shower women with more reverence for all they accomplish despite age-old concepts.

When did you know that acting was your gift?

Jill Marie Jones:That’s a good question. There’s not one particular moment that I can think of but what I will say is that the writing was always on the wall, literally. Ever since I was a little girl I’ve always migrated towards art, poetry, and dance. Any place where I could express my creativity was the place that drew me in. I do remember being very dramatic as a child. I used to watch ABC soaps with my grandma and I also remember being mesmerized by Erica Kane (Susan Lucci on All My Children). I would recite all of her dialogue. I was eight years old pretending to be Erica Kane. Can you imagine? Classic.

You have such an extensive resume, have you ever had difficulty finding a role?

Jill Marie Jones: Is the blue-sky blue? Absolutely! Being a black female in this industry isn’t the cushiest walk on feathery grass. It can be discouraging at times. But I am super excited and hopeful about what I am witnessing right now. There are a lot of great things happening.

You and Jill have a great chemistry onscreen, as if you’re best friends in real life. Have you worked together before on previous projects?

Maarha Hill: Jill is amazing. Her commitment to her craft is inspiring and she’s a very generous actress. She and I connected immediately so the friendship you see is real, but we haven’t’ worked together previously.

Do you have any advice for a novice actor? Or what advice would you have given yourself 20 years ago?

Jill Marie Jones:Work hard! Take every class you can. Study. Study. Study. I truly believe that success is where preparation and opportunity meet. Also, know who you are and be clear on what you want. There are a lot of roads that can take you to a lot of places, make sure you’re on the right one. And stay focused.

In “Delilah,” what growth would you like to see in your character Tamara Grayson?

Jill Marie Jones: That’s kind of a hard question because I’m still getting to know her. But I always say that there are many colors that make up who we are as humans and what I’ve seen so far (in Tamara) … so far, so good. 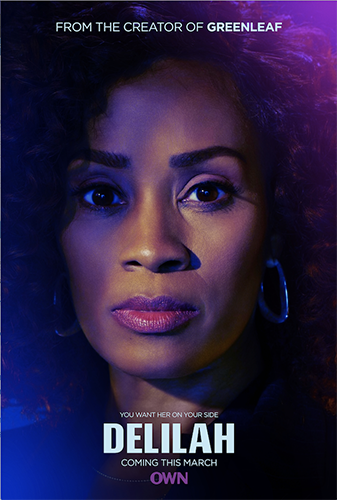 Supplied by OWN TV Public Relations

Wardrobe plays such an important role in every character, as a successful attorney, what can we look forward to Ms. Grayson wearing this season? Did you have any input on her fashion choices?

Jill Marie Jones: Wardrobe does play an important role in the molding and in the presentation of a character. For me, personally, it’s extremely important. Tamara’s clothes are so fly! I can’t wait for you guys to see. Tamara is a high-powered attorney at the largest firm in Charlotte, so you can only imagine. S/O to Johnetta Boone (our Designer/Key Costumes) for just knocking it out of the park! I did have some input and we had so much fun bringing Tamara to life.

Taking care of your mental and physical health is very important, how do you take care of yourself? Is there a special routine that you follow?

Jill Marie Jones:I’m all about self-care. What keeps me aligned is meditation, eating lean and clean, and exercise. It just makes you feel good. Let’s be clear, I am from Texas, so I do eat EAT but I try to be mindful with what I’m putting in, and the meditation helps me to calm life’s chaos.

Balancing her career and her children are the biggest obstacles for Delilah. How is she making it all work?

Maarha Hill: Barely! It’s her commitment to justice and the love for her family and other people that keeps her motivated. This case is pulling her heart in several directions.

Supplied by OWN TV Public Relations