Singer/songwriter, Crystal Starr has just released a brand new single titled, “Goodie Two Shoes.” Starr was inspired to tap into a classic throwback nodding to ‘90s R&B and pop and she did the damn thing! We wanted to catch up with her to discuss the inspiration behind the single, how quarantine life has been treating her, and much more!

Tell us about your new single, “Goodie Two Shoes.”

“Goodie Two Shoes” is something different from the releases that I have done. I wanted to do a fun song that fit my personality. I grew up listening to Madonna and Prince. I’m Puerto Rican and black so on my Spanish side, I grew up with salsa, Madonna, Paula Abdul, and Janet Jackson. With my black side, I listened to The Temptations, Prince, and all those artists during that time. I really wanted my fans to get a glimpse of who I am as an artist and as a person for this song. This album tells people to be their true self no matter where you come from. We live in a world where it’s hard to be yourself. I was always deemed as “the good girl” or the person doing certain things. Nobody wanted to invite me anywhere because they knew I wouldn’t do certain things, so I really wanted to write a song for girls who really feel the same. It’s okay to choose to do the right thing or to do things that everyone else is not doing. It’s okay to be that. I grew up that way and wanted to let others know that it’s okay.

What inspired the music video for the single?

Honestly, I really needed it. For a lot of people, it’s been hard, and it has been. There has been ups and downs, but I needed this downtime. I’ve been gone so much. I’ve been on tour for the past ten years straight. Every single week, I was gone. I would be home for two or three days during the week. It’s nice to actually sit down and face things that you have not been facing in a long time because you’re always on the go. I actually just spoke to some girls in high school and I explained to them that sometimes it’s good to just sit still. The bible says, “Be still, and know that I am God.” It’s hard as people to be still. We get antsy or get annoyed but it’s good to face those things. I faced a lot of those things myself. It’s been good. There are no shows until next year (hopefully).

I’m currently working on my next single which is called, “All Mine.” In a couple months, we’ll be releasing another single called, “I Still Love You.” Both singles are on next to go out. It’s funny because during this quarantine, I started to learn many things. I learned how to produce. “All Mine” will be fun to release because this is the first song I’ve ever produced on my own. It’s upbeat, fun, and I’m excited for people to hear it. It’s my very first production all on my own so I’m excited about that. 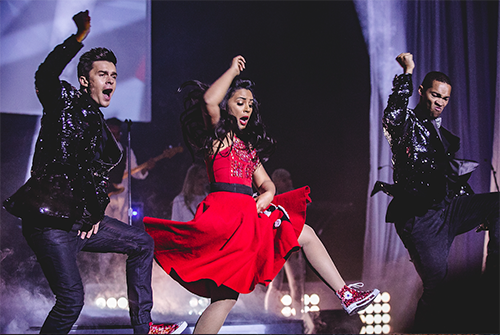