The standout, refreshing scent of L’Immensite by Louis Vuitton paired with ginger preceded Jonathan E. Coleman as he arrived in Hollywood for his exclusive interview with Sheen Magazine.

L’Immensite by Louis Vuitton is one of his favorite colognes. Coleman has learned the powerful role that first impressions play when it comes to amassing some of the endless possibilities in the entertainment industry. He’s a rare gem in many ways — from his unmatched work ethic to his uncommon hazel green eyes. Coleman has a distinctive ability to visualize ideas from conception and manifest them into reality through his innovative productions. He knows exactly how to draw opportunities to himself that would probably take someone else decades to obtain.

Standing at 6’3, the Los Angeles native and global event producer embraces California style to the fullest. Coleman adorns his frame with what he calls laid-back fashion pieces.

For Coleman, the feeling of being free is at the heart of his wardrobe, which leads him to dress up wearing comfortable clothing or dress down by sporting Jordans. But make no mistake, when it’s showtime, Coleman knows how to step it up and dress it up. Dubbed “The Entertainment Architect,” the entertainment executive and influencer has done everything from directing a production that featured A-listers Denzel Washington and Angela Bassett to producing some of Hollywood’s biggest live events.

Because Coleman was taught early on that the first thing people notice is one’s hands and feet, he makes sure to wear a fresh manicure and nice pair of shoes every day. His extensive shoe collection serves as both a fashion statement and an investment. It includes classic Gucci shoes which are his top choice to pair with his two-piece suits when producing Hollywood events. “I think it’s important to have a nice shoe on your foot,” he tells Sheen. “I think it represents a person, and where they’re going. I take pride in that.”

The mogul also finds himself experimenting with color now more than ever as he’s been radiating light and the manifesting power within him to create innovative, thought-provoking and life-changing experiences.

Somewhere between Coleman producing and managing live events including Kanye West’s Sunday Service, managing one of the most talented musical collectives ever and serving as co-owner of Infiniti Music Group, Coleman finds time to chat with Sheen Magazine about first impressions, California style and the Law of Attraction. 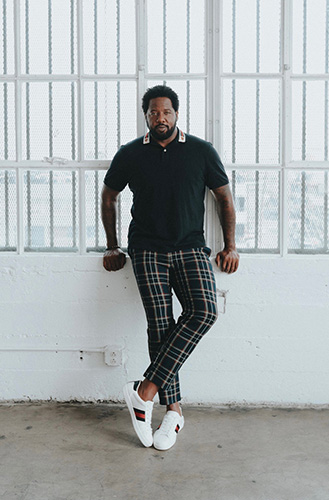 First impressions are so important in business. How have your image and presentation positioned you to be one of the top producers in Hollywood?

Wow, I had to grow to get to this point honestly. Starting out, I had to recognize and understand that first impressions, appearance, conversation and relatability were so important in managing my network and relationships in the industry. I grew to understand that your appearance is something that people are going to remember about you. People remember those who take time in their appearance and how they present themselves. Relatability, to me, is relating to people I would like to connect with and understanding their needs while simultaneously communicating my needs to them, then finding common ground. It also means being a helpful person. So, even if I’m not able to meet their need individually, I’ll find someone who can — without expecting anything in return. What people say about me is that I’m a connector. They say this because of my network and the kind of people that I have established relationships with. I’m able to bring exactly what the person wants to the table.

How important is it for you to embrace your personal style? How has being a native Californian influenced your style?

I’m a California guy who likes to dress comfortably. I truly enjoy being free with my sense of style. Most people know that in California, we’re a little laid-back in our style. I’m a versatile dresser. It’s always been told to me that the first thing people look at are your hands and feet. So, I try to always keep a manicure and wear a nice shoe.

I’m excited about my shoe collection. I think it’s important to have a nice shoe on your feet and make an investment that may pay off greatly later. I think it represents a person and where they’re going and that they take pride in their journey.

On occasions in LA when I’m heading out, I definitely dress up. A tailored pair of slacks and a fitted button-down shirt is my networking go-to look.

Recently, my favorite shoe to wear is Gucci or Yeezy. I can dress them up or down. I also have a couple of pairs of Jordans that I like to play with. But besides that, I’ll have on a T-shirt and sweats or shorts because I truly enjoy the feeling of being free.

When you dress up for an occasion, you always have to dress for success. My team and I know that in certain rooms while networking, you’re not able to reach everyone one-on-one. That’s why it’s very important that you find the right look that’s going to make you stand out, even while you are networking with others. There’s been several times in which I was speaking to someone and another person was drawn to me from across the room wanting to connect and start communicating because of my stature, unique eye color and sense of style. You have to always allow your style to work for you instead of you working for your style. Your style and fashion are what accessorize your character as an individual.

Lately, my team has challenged me to experiment with color. People respond differently when you take risks. That’s also what having a team is about — having trustworthy individuals to push you into uncharted territories. I’ve been taking a lot of risks with color. The energy I get from other people has been electric. I’ve even felt lighter and better and have been enjoying every minute of it.

My favorite scents that I’ve been wearing lately are Gentleman by Givenchy or L’Immensite by Louis Vuitton. My staple favorite is L’eau D’issey Pour Homme by Issey Miyake.

What is your definition of the law of attraction? How have you been able to consistently attract such amazing opportunities in show business?

To me, applying the law of attraction means to completely embody what you want and desire. The first step is to visualize it and see it in your mind by picturing yourself in it. The second step is to write it. Remind yourself what you visualized in your head in writing. The Bible says that faith without work is dead. So, to get what you want, you have to put it out there in your relationship building as well. Really speak what you want into existence and do things that are aligned with manifesting it into your reality. Befriend the people that you imagine in your head and remember that you have the power to create your destiny. It all lies within, because the power is in you.

The Law of Attraction is just that. It’s a universal principle that transcends religion. You don’t have to be a Christian or Muslim to attract things to you. Attracting something is literally and solely within you. It’s about who you are and what you want to bring towards you.

If you’re a positive person, you will attract other positive people. You determine what you are going to attract. It’s all on you.

All images by Jordan Kelsey Knight