The R&B songstress talks about her latest track and opens up about finding new love.

Romance is in the air for proud songstress Jae’ Morrissa! The singer is in love and she wants the world to know it.

Jae’ Morrissa had social media users in an absolute frenzy after she revealed her engagement news in a sneak peek of the all-new music video for her latest single, “Nobody Like Me.” In the clip, Jae’Morrissa is seen flaunting a gorgeous wedding dress, which left her longtime music listeners floored.

“He came into my life when I least expected it,” the singer tells Sheen of her beau. “My fiancé and I went to high school together. I hadn’t seen him in over 30 years and we reconnected by chance.”

For Jae’ Morrissa, the wedding proposal came as a complete surprise. But it’s safe to say it was a long time coming. Things changed when the two locked eyes in 2020 — it was the defining moment that Jae’ Morrissa knew he was the one.

With new music on the way, Jae’ Morrissa could not be more excited. And more good news for the singer, following the Jan. 8 release of “Nobody Like Me,” the track ranked in the Top 100 Pop Songs chart on iTunes. With more than 40,000 songs added to streaming platforms daily, that is no easy feat.

The song has also received international radio airplay. Domestically, “Nobody Like Me” is making rounds in major markets, including Atlanta’s popular radio station Power 103.1 FM. 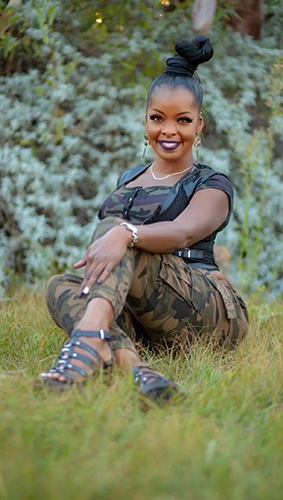 As Jae’ Morrissa quickly approaches 1 million streams on Spotify, the jazzy pop singer can hardly wait for the official release of her highly anticipated music video, which premieres on YouTube Friday.

“Nobody Like Me” marks her fourth single release since her 2019 debut track with a catchy name, ‘Just My Next Song.’ Jae’ Morissa dropped fan-favorite tunes ‘AWOL’ and ‘Butterfly” last year.

In her empowering track ‘Nobody Like Me,’ Jae’ Morrissa sings gripping lyrics.

“Now you say you’ve changed but that’s what never changes,” she croons. “Sorry it hurts but this car don’t reverse / Nobody wants you more than the guy that was just walking out your door / Well it’s too late / I found my king / Bling, bling I got the ring.”

Co-written by Natalia Bortolotti and Andrew Colin Hodges, the song is a redemption love anthem.

Jae’ Morrissa is known for her moving tunes. When fans listen to her heartfelt track “Butterfly,” which is based on her true story about finding herself and loving herself, she wants them to realize she finally feels at peace.

“I was once in a cocoon, not knowing how to release my freeness and my beauty to the world,” she tells Sheenof her experience. “I was not living my life to the fullest, I felt caged. But now, I feel like a butterfly, free to be me.”

And with a newfound sense of freedom, Jae’ Morrissa wants to express her colorful spirit and connect with the world as much as she can. The vocalist is confident that she will continue to reach more music listeners and expand her fan base. After all, with her mantra,

“Do not fear, success is near,” the singer is confident that she will make her dream to reach the masses a reality.

Despite her past heartbreak, Jae’ Morrissa wasn’t going to let fear stop her from falling in love again or using her voice to make someone else smile and feel good about themselves. The singer is passionate about her work and believes that through her music, she can bring peace to those coping through difficult times.

For Jae’ Morrissa, who grew up listening to music greats including Deniece Williams, Stephanie Mills, and Teena Marie, music really is life. The singer says creating music has been a helpful aid in her life that sets her free from pain, brings her closer to love, and allows her to express herself openly and honestly.

She hopes that through her ballads like “Nobody Like Me,” she can inspire her fans and assure them that they are not alone, much like other artists have done for her during her times of need.

This feature was edited by Darlene Aderoju