Los Angeles, California – it’s home to the entertainment industry’s most beloved icons, legends, and stars. It’s also a place of love and war, peace and conflict, and a city known for making dreams come true and at times nightmares – from the infamous Rodney King beating to the heavy presence of gangs. In a post-pandemic world where conflict with the police and the Black community reached new highs, the Black Lives Matter movement along with Diversity and Inclusion Campaigns sought to unite and people of all colors in a way that only music seemed to be able to in past times. 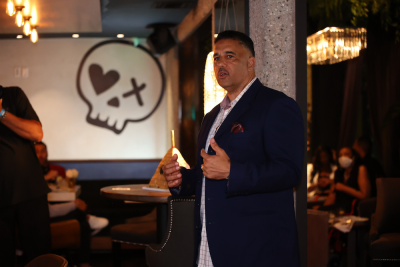 For many entertainers, it was time to make their voices heard not only on stage while performing but locally, nationally, and globally. Like Mahalia and MLK during the civil rights movement and with the courage of Beyonce at the 2016 Superbowl more and more stars are lending their voices in support of political candidates.

The stars united on Sunday night for the Soiree benefiting Sheriff candidate Lt. Eric Strong. It all happened at La Conde restaurant in Santa Monica California where a host of celebrities, political activists, and influencers gathered to celebrate Strong’s next step into one of the most coveted seats in local law enforcement and politics, shoes that to date, no other Black man or woman has filled. If chosen, Strong will make history as LA’s first Black Sheriff.

International recording artist Alli Star, who has toured with Chaka Khan and Barbara Streisand, sang the Black national anthem “Lift Every Voice and Sing” before Stevie Wonder took the stage with his stylish black suit lined with fine leather and embroidered with royal blue details to accentuate his iconic look. While his fans and industry peers watched in awe, it was his humility and humor that captivated everyone. When being announced and introduced before speaking, the legend jokingly booed himself while the crowd clapped and screamed at the mention of his name. 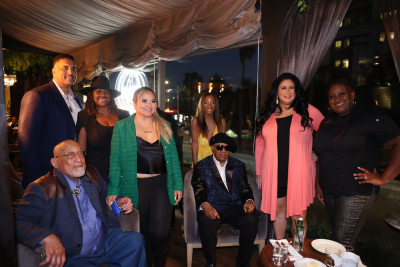 The 25x Grammy Award winner spoke about meeting Barak Obama during his campaign to become a senator and likened his experience with Obama to his experience with Strong. “The most important thing is, in our conversation, what I felt from him [Obama] was sincerity. I said, let’s say a prayer. I know you’re running for senator, but my prayer is that you’ll be far bigger than just a senator. You’ll be a president and history has done what it has done and as you know he was our president Barak Obama. I believe the same in this man that I met, Eric Strong,” said Stevie Wonder.

“It’s about bringing people together. It’s about we the people – all of us having leadership that wants to see everyone win but the bad people get what they deserve. It’s not about them vs us, it’s about us coming together to actually get a person who can lead this city in a place where we together are working to making this a better city and influencing us to have a better state and influencing us to have a better country. We must become a united people of this country, we have to do that but it’s only through leadership that is committed to making it better and bringing us together for the good of us, for the safety of us.”

Strong, who has been a victim of crime himself, has the community at the forefront of his campaign and plans to lead with compassion, respect, and dignity.

“I don’t think all our fixes are all that technical or all that difficult. We just need to care about people, we need to put community first, and we need to bring a sense of decorum and professionalism back to the office and we’re gonna do that through messaging. The reality of it is this – in all my time in the sheriff department, in all my time with my wife – my wife’s time with the sheriff’s department, we’ve never had the messaging on the inside that say’s community first, treat everybody with respect, compassion, and dignity will be the cornerstones of every point of contact,” Strong said.

Not standing alone, the Sheriff hopeful was joined by Bishop Henry Hearns, the first Black mayor of Lancaster, California.

“As far as I’m, concerned he’s late. It should have happened long ago, and I’ll do everything I can to help him become a sheriff of LA County. I believe what we need to see is an equitable system that is fair to every person regardless to their color, agenda, or however they’re made up – for every person to get an equitable opportunity and I believe Eris will do that. I think that he’s had the experience and sensitivity to the various cultures in our areas. in particular, the underserved cultures, and I think Eric will be able to do that, Hearns told Sheen.

In a heartfelt message to LA, Strong added that “We have to bring about real transparency. I’m a firm believer that look if the tax payers are paying for us they should get the information that’s gonna give them a little bit of trust, a little bit of comfort. They’re paying for the camera’s so why should that they have to fight to get the footage. And actual accountability. In all my years with the sheriff’s department for decades there has been very little accountability. We even have a syndrome, I call it the ‘write it right syndrome’ where we go through great lengths to justify what deputy’s are doing when we just need to go by the facts and call it like it is and then maybe we’ll have some trust.”